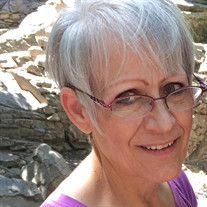 Lorri Hayes Muir passed on November 11, 2017, in Salt Lake City, Utah after a lengthy illness. Lorri was born June 27, 1953 to Loran and Edna (Hope) Hayes in Soda Springs, Idaho. Lorri grew up in a loving home and was the youngest of five girls. As a little girl, Lorri loved to be around her sisters Being the youngest, she was often called upon to chaperone dates for her older sisters. In 1974, Lorri was called to serve in the Halifax, New Foundland, Canada Mission for the Church of Jesus Christ of Latter-Day Saints. She served there honorably and returned home to marry the love of her life, Ewart (Jody) Muir. They were married in the Idaho Falls Temple on October 19, 1976. Not wanting to wait to start their family, they began welcoming the first of their six children in 1977. Their children include: Heath (deceased), Kyle (Kristy) - (Vernal, Utah), Melanie (Tyler) Wallace (Roosevelt, Utah), Bryce (Katie)- (Riverton, Utah), Michelle (Craig) Nicholls (Herriman, Utah), Brayden (Cami)- (Elgin, South Carolina). Lorri knew that being a mother was what she wanted to be. She was very caring and giving to all of her children and created a warm and loving home for them to grow in. When Jody was injured at work and had to be at home, Lorri, without hesitation, went to work to help provide for the family until Jody recovered. She worked for a jewelry shop in Soda Springs and she enjoyed the job and the people she worked with while there. When Jody recovered, they moved the family to Idaho Falls, Idaho, where Lorri started working at Sam’s Club. When the family moved to Salt Lake City, she transferred with Sam’s Club to continue her work. The move to Salt Lake City proved to be inspired. They soon learned they had moved to Utah so all of their children could find their spouses and start their own families. Lorri loved being involved with her kids and all of her grandchildren. Lorri was the grandma that enjoyed giving to the grandkids even when the parents said no. She wanted to give them whatever she could when she could. Many times she would go to the store and wouldn’t come home with just one treat or surprise for the grandkids. It was two or three and she would say she wanted it but the kids are welcome to have what she has. Many times she wouldn’t touch what she brought; but loved watching the grandkids enjoy their surprises from Grandma. Lorri was a faithful member of the Church of Jesus Christ of Latter-Day Saints, fulfilling her callings to the best of her ability and loved to help out when needed. She loved the Gospel and shared her testimony through word and deed. Lorri did so many things to help all of her children. She showed her devotion to her children through her many acts of kindness and service and thoroughly enjoyed their company. Every party, every holiday, every normal day after school wasn’t complete until Lorri was there. Her absence will long be felt but we take comfort in knowing she is still with us in Spirit. Lorri is survived by her children, their spouses, and 18 grandchildren: Ethan, Korbin, Tristin, McKenzie, Logan, Conlan, Merida, Dyllan, Hailey, Hailey, Boston, Mason, Levi, Ella, Wade, Dallon, Paxton and Elaina. She is also survived by her sisters: Karen (Dale), Nola (Randy), Karyl, and Diane (Jay). She was preceded in death by her husband Jody, her son Heath, her parents, her husband’s parents Ewart and Luella Muir. Funeral services will be held at The Church of Jesus Christ of Latter-day Saints Stake Center in Soda Springs, Idaho on November 18th at noon. A viewing will be held 11:00 a.m. preceding the service.

Lorri Hayes Muir passed on November 11, 2017, in Salt Lake City, Utah after a lengthy illness. Lorri was born June 27, 1953 to Loran and Edna (Hope) Hayes in Soda Springs, Idaho. Lorri grew up in a loving home and was the youngest of five girls.... View Obituary & Service Information

The family of Lorri Hayes Muir created this Life Tributes page to make it easy to share your memories.