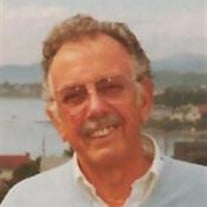 Witty, razor sharp and a beloved Dad, Grandpa and Uncle to many, Louis James (Jim) Smith passed away April 4, 2011 after a long illness. Jim was born on February 12, 1925 in Tamaqua, PA to John and Elizabeth Keegan Smith. He grew up in Chicago, a city that always remained dear to his heart. He served our country in the Army during World War II. Jim was successful for many years in the Chicago tile business. In 1969, Jim moved with his family to Salt Lake City. As the years went by, there were short stays in Tucson, AZ as well as in Chicago. Jim continued to work in sales (where he had a true gift). He also enjoyed many happy retirement years, spending vacation time in Victoria, BC and in Pennsylvania, where he connected with newly found relatives and rediscovered some of his roots. Jim could light up a room with a funny joke or story, and his clever wink and winning smile made you happy to be in his presence. He greatly enjoyed a good meal and a good restaurant and he fondly reminisced about Chicago's great restaurants and the places that he frequented long ago. Jim loved to affectionately nickname the people and places he knew in his life. His license plate ("SAY YES") captured his outlook and his spirit. Jim was a genuinely upbeat person and he viewed life through optimistic lens. He had remarkable intelligence and eagerly helped anyone who might need a boost, an encouraging word, or assistance around the house. Jim loved his family and the simplicity of a nice visit with those that he loved. He was strong, loyal and devoted and he will be greatly missed. Jim was preceded in death by his parents, his wife Maxine, his brother John (Jack), his daughters Patricia and Christie, and his granddaughter Katrina. Survivors include his children, Gianni, Barbara, Jim, Linda, Richard, Casey, Mary, Julie, Russ, Jim Jones and their spouses; his cousins, Joe and Francisca; sister-in-law, Virginia; 32 grandchildren, many great-grandchildren; and numerous nieces and nephews. The family would like to give a special thank you to his devoted and loving niece, Connie, and all of the nurses and staff at Garden Terrace. Graveside services will be held on Friday, April 8, 2011 at Mt. Calvary Catholic Cemetery at 11:00AM. Flowers may be sent in care of Jim Smith. 3805 Sumter Drive, West Jordan, UT 84084.

Witty, razor sharp and a beloved Dad, Grandpa and Uncle to many, Louis James (Jim) Smith passed away April 4, 2011 after a long illness. Jim was born on February 12, 1925 in Tamaqua, PA to John and Elizabeth Keegan Smith. He grew up in Chicago,... View Obituary & Service Information

The family of Louis James Smith created this Life Tributes page to make it easy to share your memories.

Witty, razor sharp and a beloved Dad, Grandpa and Uncle to many,...