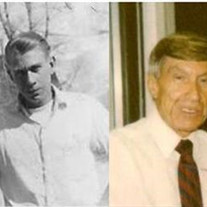 Louis Albert Winkler, our devoted husband, father, and brother, passed away peacefully on October 11, 2014 in Salt Lake City, Utah following a long, courageous battle with Alzheimer’s disease. Born to Wilford and Emma Berger Winkler on August 15, 1927 in Mount Pleasant, Utah, he grew up in a loving family with two older brothers, Marvin and Paul, and a younger brother, Ernel. After graduating from North Sanpete High School, he joined the Merchant Marines and traveled throughout the world. Later, he served his country as a Lieutenant in the United States Air Force. Louis prized education, earning a Bachelor’s degree in Psychology from Brigham Young University and a Master’s degree in Psychology from Florida State University. On June 2, 1961, he married Sheila Gay Hales in the Salt Lake City LDS Temple. Their union lasted 53 years and produced two sons, Bryan and Douglas. For six and a half years, he worked as a Counseling Psychologist in Vocational Rehabilitation for the State of Utah. Subsequently, he worked diligently for almost thirty years as a Counseling Psychologist for the Veterans Administration, first in Portland, Oregon and later in Salt Lake City, Utah. He retired from the Veterans Administration in 1994. He was a very private individual. Though reserved among others, he was very close to his family. He was kind, gentle, humble, and good-natured. Dad and Mom worked very hard to provide a family life that was filled with love, happiness, and comforts that other families never experienced. He had a special fondness for pets and frequently could be seen walking the family pups around the neighborhood. Louis is survived by his loving wife Sheila, sons Bryan and Douglas, brother Ernel (Diane), and Maggie, his frisky Lhasa Apso. He was preceded in death by his parents, Wilford and Emma Winkler, and brothers Marvin and Paul Winkler. A viewing will be held Sunday, October 19, 2014 from 6:00-8:00 p.m. at the Holladay North Stake Center, Valley View 8th Ward Chapel, located at 4395 South Albright Drive, Holladay, Utah. Funeral services will be held at the same location on Monday, October 20, 2014, at 11:00 a.m. A viewing will also be held prior to the services from 9:45-10:45 a.m. Interment will follow at Wasatch Lawn Memorial Park (3401 South Highland Drive, Salt Lake City, Utah). Our family wishes to thank the Veterans Administration, Angel’s Crossing Home Hospice, and Mount Olympus Rehabilitation Center for their compassionate care during the past five months.

The family of Louis Albert Winkler created this Life Tributes page to make it easy to share your memories.