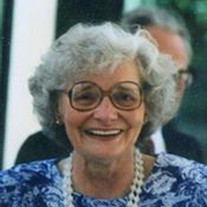 Louise Marie Linton Salmon, died in her home on Thursday, October 13, 2011, less than 6 days after the death of her husband of 68 years, David William Salmon. Louise was born October 21, 1917, the only child of Leroy and Lillian Lovisa Christofferson Linton in Ogden, Utah. Louise grew up in Ogden where she attended Ogden High School and Weber Junior College, then went on to receive a BA degree in English from U.C. Berkeley, and a Master’s degree in Speech and Drama, as well as a secondary teaching certificate, from Stanford University. Louise met David William Salmon at the Palo Alto Ward and they were married on June 15, 1943 in the Mesa, Arizona, Temple. Louise and Dave spent from 1946 – 1968 in St. Louis, Missouri, where Louise skillfully combined the responsibilities of motherhood with teaching courses in speech and English composition at Washington University and many church callings in the growing St. Louis LDS community. In 1968 Louise and David moved to Los Altos, California. Among other callings there, she taught Gospel Doctrine classes for seven straight years. She and Dave spent the last twenty years of their lives in Provo, Utah. Louise and David were the parents of four children, Louise Anne (Joel Graham), David Christopher (Susan), William James (Vicki), Linton Gay (Lisa); ten grandchildren and eleven great-grandchildren. Louise’s generous nature resulted in a home with a door open to many, including three sisters who became as daughters to her and David: Elizabeth Hill Bruce, Dorothy Hill Yancey, and Jennie Hill Cobb. Three things were the passions of Louise’s life, her children, genealogy and her Church. Louise was exceptionally skilled with her hands. She produced works of art in needlepoint, cross-stitch, knitting and crocheted pieces, and she tailored clothing for herself, her husband and children. She was a skilled pianist and organist and loved playing for her family and at Church. Louise was passionate about genealogy and dedicated decades of her life to researching and writing the histories of her own family and helping others with their genealogy. Louise was preceded in death by her parents and her husband. She is survived by her four children. A funeral service for both Louise and David was held on Friday, October 14, 2011 at the Timpview LDS chapel in Provo, Utah. They were interred side-by-side later the same day in the Ogden City Cemetery. The family expresses their deep appreciation to the caregivers of Aspen Senior Care and Leah Hill, all of whom gave loving care to both Louise and David the last few years of their lives.

Louise Marie Linton Salmon, died in her home on Thursday, October 13, 2011, less than 6 days after the death of her husband of 68 years, David William Salmon. Louise was born October 21, 1917, the only child of Leroy and Lillian Lovisa Christofferson... View Obituary & Service Information

The family of Louise Marie Salmon created this Life Tributes page to make it easy to share your memories.