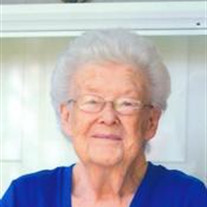 Lucile Smith Wardle passed away on October 1, 2012, at age 92 at The Residence of CareSource in Salt Lake City, UT, due to pneumonia and other issues related to age. Born in Lehi, Utah, on November 20, 1919, to Archie Ray Smith and Ruth I. Brown, the only daughter of six children. Raised in Garfield, UT, graduating from Cyprus High School in Magna, UT, Class of 1937. Attended LDS Business College. On September 15, 1941, Lucile married Donald L. Wardle in the Salt Lake LDS Temple. They were married for almost 66 years until his death in 2007. Following the outbreak of World War II, Don became an Army officer, and for the next twenty-seven years they lived where assignments took them – coast to coast in the United States and in Italy, Germany and Japan. Wherever she lived, Lucile enjoyed the diversity and culture of those she met. She served over a thousand hours as a Red Cross volunteer in Army hospitals in Germany and Virginia. She also served in many leadership and teaching callings in the LDS Church wherever she lived, including service as an ordinance worker in the Washington, D.C. Temple. Following Don’s retirement from the Army in 1969, they remained in the Maryland/Virginia area for 25 years. Finally, after 52 years, they returned home to Utah in 1994. Lucile is preceded in death by her husband, parents, infant daughter Lana Ruth, and brothers Ernest, Harold, Alden and Heber. Survived by sons Donald R. Wardle, Riverton, UT, and Steven J. Wardle, Midvale, UT; brother Archie Duane Smith (Barbara), Provo, UT; and grandchildren Jenny Anderson (Kyle), Danville, KY; Emily Kirkendall (KR), Nampa, ID; Rachael Stewart (Eddie), Gainesville, VA; and Greg Wardle (Brittany), Cheyenne, WY. Great-granddaughters Abigail, Sophia and Josephine Anderson; Bailey and Alayna Kirkendall; and great-grandson Graham Stewart. Also many Smith and Wardle nieces and nephews. The family wishes to thank the professional and caring staff at The Residence of CareSource in Salt Lake City; the doctors, nurses and aides at St. Mark’s Hospital in Salt Lake City; and the staff of Premier Funeral Services of Salt Lake City for their loving service to Lucile. Funeral services will be held Friday, October 5, 2012, at the Union Fort 7th Ward Chapel, 6770 South 500 East, Midvale, UT, at 11:00 a.m. Viewing will be held prior to the services from 9:30 to 10:45 a.m. Interment will be at Mount Olivet Cemetery, 1342 East 500 South in Salt Lake City.

Lucile Smith Wardle passed away on October 1, 2012, at age 92 at The Residence of CareSource in Salt Lake City, UT, due to pneumonia and other issues related to age. Born in Lehi, Utah, on November 20, 1919, to Archie Ray Smith and Ruth I.... View Obituary & Service Information

The family of Lucile Wardle created this Life Tributes page to make it easy to share your memories.