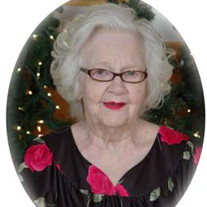 Lucille Peay Ostler On the early Sunday morning of August 30, 2015, our beloved Lucille Peay Ostler passed away peacefully in her sleep. She was two months shy of being a centenarian. Born October 25, 1915, in Arthur, Utah, to Eva Hardy and Sterling George Peay, she lived her first 31 years in Provo, Utah, where she was known as Lucy. She graduated from Provo High School in 1934, where she excelled at state level competitions of secretarial skills including exemplary shorthand. Eventually she went to work for the Utah County Department of Public Welfare as a part-time typist. Within two years she had advanced to be the personal secretary of Director William H. Callahan. She worked nine years for him and considered him to be like a second father. Director Callahan had a friend, Dr. David Ostler, whose son returned in 1945 from Europe, where he had served in WWII. Lucy fondly referred to it as a “conspiracy” of these two men that brought her and Alma Boyd Ostler together. She and Boyd were married August 20, 1946, in the Salt Lake City LDS Temple. Lucy then became known as Lucille, Sister Ostler, Mrs. Ostler, Mrs. A. Boyd Ostler or simply Mom, but her friends and family from Provo always called her Lucy. For most of her life, she served the LDS Church in one capacity or another, usually as a Primary or Sunday School secretary. Clearly, however, her favorite calling was one of giving a short inspirational thought at the close of the weekly Relief Society meetings for most of a decade. It was a simple calling, really, but the sisters always told her how much they enjoyed her thoughts. Lucille spent her married years supporting her husband as he became a pharmacist and worked toward establishing a successful “corner drugstore,” Ostler Pharmacy, in an era that favored big department stores. They moved to Salt Lake City and to John Day, Oregon, but ended up on Roosevelt Street in Midvale, Utah, which they called home for nearly five decades. In the meantime, Lucille gave birth to seven sons and somehow managed to raise them without going crazy. She served as a Cub Scouts Den Mother and helped run the local PTA. She kept in contact with a circle of old friends, going to reunion dinners at one another’s homes once a month for thirty-plus years. But life changed considerably for Lucille when Boyd died in January 1995. She stopped attending church and took on a very passive attitude towards life. Some women in the ward coaxed her into joining their reading sessions, weekly meetings that could be described as home evenings for widows. Her son Gary helped keep her up and going for six years, but it wasn’t enough. In April 2001, Lucille’s sister and brother-in-law (Maxine and Ken Forshee) moved her down to live next to them in Washington, Utah, where she was cared for and watched over by them for the next six years. In August 2007, she was taken in by her son Karl and his wife Julie for what turned out to be the rest of her days. Karl and Julie (an LPN) gave Lucille eight years of committed, loving care and a renewed lease on life as “Granny.” At Karl and Julie’s home you could drop in and enjoy an aging Granny as well as active Grandchildren. Eventually, her perceptive abilities, her muscular control, and her communicative abilities all faded as she approached her one-hundredth birthday. Finally, in her last weeks, her energy and spirit simply ebbed until she was gone. Gratefully her decline was soften by an invaluable group of caregivers including: Dr. Casey Stelter, Josh Clark, Brighton Hospice and Staff, Trudy Osborn, Nurse Jeanie, Mallory, Josh, Jordan, Kelli Hurst, Morgan Martinez, Trudy Findley, Nurse Amy, Brieana Wadsworth, and a special friend and caregiver Jesslynn Patton Anderson. Lucille was preceded in death by her parents, her husband Alma Boyd Ostler, her sister Leah Peay Christensen, and a younger brother who died in infancy. She is survived by her younger sister Maxine Peay Forshee, her seven sons and their spouses: Brian and Rosey (Gad), Neal and Martha (Switzer), Paul and Linda (Petersen), Gary, Creed and Kris (Billington), Todd, and Karl and Julie (Hansen), plus 13 grandchildren and 28 great grandchildren. Lucy. Lucille. Sister Ostler. Mom. Granny. Granny Great. It’s time to say goodbye. Please know that we love you forever. Funeral services will be 11:00 A.M., on Friday, September 4, 2015, at Roy Stake 5th Ward, 5301 South 2100 West, Roy, Utah, where a viewing will be prior to services from 9:15 – 10:45 A.M. Interment will be 2:15 P.M. at Midvale, Utah, Cemetery.

Lucille Peay Ostler On the early Sunday morning of August 30, 2015, our beloved Lucille Peay Ostler passed away peacefully in her sleep. She was two months shy of being a centenarian. Born October 25, 1915, in Arthur, Utah, to Eva... View Obituary & Service Information

The family of Lucille Peay Ostler created this Life Tributes page to make it easy to share your memories.

Lucille Peay Ostler
On the early Sunday morning of August 30,...