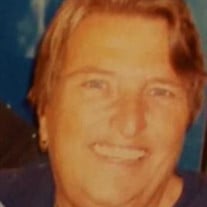 LUCREZIA TORRESI Free from pain and suffering, Lee (Lucrezia) Torresi entered into the presence of Jesus on March 17, 2022. Lee was born in Brooklyn, New York on December 20, 1946. Born to the parents of Charles and Rose Dinolfo, Lee grew up with three brothers and two sisters and was known as a fearless tomboy! She graduated from Lafayette High School and spent the next several years as an officer with the New York City Police department. Lee moved to Utah in 2002. She worked as an enforcer for the Park City Security department until her retirement in 2014. Lee’s dream was to be a veterinarian. All animals were drawn to Lee, and she had such love and compassion for them. She is survived by her sister Gail (Charlie) Manfre; brother Charles (LouAnn) Dinolfo, as well as her sister-in-laws, Nancy and Carol Dinolfo. She will be remembered as a loving aunt to her nieces and nephews - Michael, Charles and Dominick Papa; Ellen (Osofsky), Richie and Robert Dinolfo; Kim and Joseph Dinolfo, Steven, Jon and Heather (Kreuzburg) Dinolfo,; Christopher, Jackie (Hess) and Michael Manfre, as well as great nieces and nephews. Lee is also survived by her loving partner of 20 years, Ron Regelin. They shared a love for their animals which included two dogs and two cats. Lee is preceded in death by her parents, sister Louise Papa, brothers Angelo and Joseph. A special thanks to Dr. Matthew Sperry and nurse Alexandra who cared for Lee with hearts of compassion in the last days of her life. Gail would like to also thank the many friends and family members who prayed for Lee throughout many years. “A Celebration of Life” will be announced at a later date. In lieu of flowers, donations in honor of Lee can be made to: Paws for Life Utah North 100 East, Heber City, Utah 84032. donations can be made via the website: www.pflu.org You will forever be in our hearts! “I am the resurrection and the life. He who believes in me will live, even though she dies, and whoever lives and believes in Me will never die”. John 11:25-16

LUCREZIA TORRESI Free from pain and suffering, Lee (Lucrezia) Torresi entered into the presence of Jesus on March 17, 2022. Lee was born in Brooklyn, New York on December 20, 1946. Born to the parents of Charles and Rose Dinolfo, Lee... View Obituary & Service Information

The family of Lucrezia Torresi created this Life Tributes page to make it easy to share your memories.