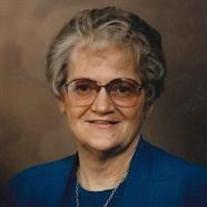 Lucy May Bevan Clark entered this world as the fourth child of Heber Ross Bevan and Eliza Ann Higley Bevan on November 25, 1931 in Teton County, Idaho. She passed away 6 February, 2018 in West Jordan, Utah. Raised in the Teton Mountains, she attended school in a one-room school house, grew up riding horses and learning to work hard. From a young age, she loved to learn and after her graduation from Teton Valley High School in 1950, she went on to be one of the first Licensed Practical Nurses in Idaho. Naturally a nurturer, Lucy loved nursing and was very good at it. Lucy was raised in the Church of Jesus Christ of Latter-day Saints all of her life and loved the Gospel. She was a life-long missionary and participated in the teaching of friends and neighbors, including two missions. Her first was in the Texas-Louisiana Mission, in the 1950s. It was there she met her husband, Ronald Carlos Clark, who was also serving. Her second formal mission was in the Seattle Spokane Mission (1991-1992) after Ronald’s death. Lucy never stopped being a missionary, whether or not she was wearing the badge. Lucy married Ronald in the Idaho Falls Temple on March 28, 1957. Together, they were the parents of three children who survive her. Lucy was a dedicated, loving mother who sacrificed greatly for her children. She instilled in all of them a love for the Gospel and a love for learning. As a young mother, Lucy worked hard to make sure her children had access to Encyclopedias and other reading material. She encouraged self-reliance and hard work. One of the defining episodes of Lucy’s life came when she was wife and young mother. In Brooklyn, New York, where Ronald was stationed with the U.S. Army, they were called home to help with Ronald’s mother, Marinda Call Clark, who was dying of cancer. After a Hardship Discharge, Lucy and Ronald packed up all their belongings and their young baby and drove cross country, where Lucy put her nursing skills to work taking care of her sick mother-in-law, making it possible for her to die in peace at home. Lucy was also thrust into the role of mother, since Marinda had 5 children, ages 17 to 4, to care for. Lucy took care of the lot of them without complaint. Ronald was as generous as Lucy and was eager to help his father, brothers and sisters when his mother passed. The Clarks were always welcome in her home and she loved Ronald’s siblings as if they were her own children. Willing to serve in any capacity, she provided many meals for neighbors, friends, missionaries and those who just needed someone to care about them. Lucy’s great sense of humor helped her be a friend to many people from different walks of life. Her greatest accomplishment was her family. She raised three children, Donna Lynn (Neal) Hunter, Keith R. (Terri) Clark, and Janet Clark Pretzer. She is the proud grandmother of 10 grandchildren and 17 great-grandchildren. She was pleased that each of her children received an education. She is survived by her children, grandchildren and great-grandchildren, her sister Ellen and numerous nieces, nephews and wonderful friends. The family wishes to thank Beehive Homes of West Jordan for all their help and care, and President Glade and the members of the Beehive 5th branch, who blessed her life in many ways. Funeral services will be held on February 12th at the LDS Church, 2901 W. 9000 S., West Jordan, at 11:00 AM. Viewing from 9:45 – 10:45 AM.

Lucy May Bevan Clark entered this world as the fourth child of Heber Ross Bevan and Eliza Ann Higley Bevan on November 25, 1931 in Teton County, Idaho. She passed away 6 February, 2018 in West Jordan, Utah. Raised in the Teton Mountains, she... View Obituary & Service Information

The family of Lucy May Bevan Clark created this Life Tributes page to make it easy to share your memories.

Lucy May Bevan Clark entered this world as the fourth child of...