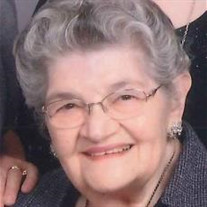 Luella was born on July 5, 1932 to Floyd and Bernice Nay Kurtz, in Salt Lake City, Utah. She passed away in her home in West Jordan, Utah on February 7, 2019 due to complications of congestive heart failure. She lived in Salt Lake City until she was 18 months old, when her parent moved to Victorville, California. She had great memories of growing up there and was a proud graduate of Victor Valley High School. Through Facebook, she still stayed in touch with friends made there. After she graduated from high school she met a handsome Air Force Airman, William Faucett, who was stationed at nearby Norton Air Force Base. The rest, as they say, is history. They were married on April 20, 1951 in Las Vegas, Nevada. They quickly began their adventure with a life in the Air Force by many moves throughout the next decades. First they moved to Kileen, Texas, followed by Bossier City, Louisiana. This is where they became parents of their only child, Marva Lou. When her husband was stationed to serve in Goose Bay Labrador, she returned with Marva to live with her parents in Victorville for a year. Following his return from Newfoundland, they were stationed in El Paso, Texas twice with a move to Riverside, California in between. He was then transferred to Moron Air Force Base in Sevilla, Spain. This was quite an adventure for the girl who was raised in the little town of Victorville, but she enjoyed every minute of it. She became very active in the NCO Wives Club which often took tours to nearby sites. They lived off base which forced her to learn some Spanish so she could communicate with the locals. The only downside was she was far away from her family back in California and letters took a long time to receive. She often commented on today’s conveniences of FaceTime and Skype wishing they had those when she lived far away. After Spain, they returned to the States, choosing to live in Woodbridge, Virginia while her husband was stationed at Bolling Air Force Base in Washington, D.C.. There they remained for the next 42 years, long past William’s retirement. In 2007, they decided it was time to move closer to family and moved to West Jordan. Luella was a member of the Church of Jesus Christ of Latter-Day Saints. In her younger days she enjoyed her callings in the Young Women, even going to camp and hiking the hills of Virginia. She also enjoyed serving in the Primary and Relief Society. In 1966, while living close to the National Archives and Library of Congress in Washington, D.C., she discovered her true calling in life of Family History. She spent many hours doing research in these buildings and ordering microfilms (that took weeks to arrive) from The Family History Library in Salt Lake City. She also took trips up and down the East Coast and to Minnesota to find those elusive relatives and ancestors. She served for many years in the calling as a Family History Consultant and Librarian. She has written and contributed to many books on her ancestors and their descendants. Her current calling at the time of her passing was as a Family History Consultant. The only thing she liked more than doing her own research was teaching others how to do their own. When the church switched to online Family Search Program, she spent many hours teaching herself how to become proficient at this new skill. Luella was preceded in death by her parents, her infant sister, Afton, her brother, Marvin Kurtz and sister, Evelyn Jane Gibson. She was the oldest child of her family and often wondered why she was the last one left here on earth. We know there is a glorious reunion going on in heaven with her family and all of those relatives she spent decades researching! She is survived by her husband, William (AKA: Bill/Buddy), her daughter, Marva Gneiting (husband, DelRoy), three grandchildren, Sara Rhodehouse (husband, Chris), Travis Gneiting, and Chad Gneiting. She is also survived by three great granddaughters, who she loved very much: Isabel and Amelia Rhodehouse and Claire Gneiting. Funeral Services will be held at the Sunset Ridge 9th Ward Chapel at 11 am on Friday, February 15, 2019 at 8134 South Echo View Drive (6261 West) in West Jordan. A viewing will be held before the services starting at 10 am. Burial will be at the Utah Veterans Cemetery and Memorial Park in Bluffdale, Utah.

Luella was born on July 5, 1932 to Floyd and Bernice Nay Kurtz, in Salt Lake City, Utah. She passed away in her home in West Jordan, Utah on February 7, 2019 due to complications of congestive heart failure. She lived in Salt Lake City until... View Obituary & Service Information

The family of Luella Margaret Kurtz Faucett created this Life Tributes page to make it easy to share your memories.