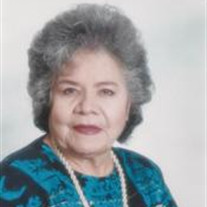 Lupe passed away peacefully at home February 1, 2013, surrounded by her family. Lupe loved birds, going out to eat, telling jokes and making people laugh. She could entertain for hours with funny stories about her childhood, such as accidentally blowing up the beauty shop where she worked as a young girl. She would amaze you with her memories of teaching herself and Grandpa English, of Grandpa in mine explosions and their houses burning down in Bingham. If you forgot what you were going to say, she would laugh and say, “It must have been a lie.” You never left Grandma Lupe without her telling you, “Buckle up” and “Don’t drive fast,” or “Oh Lord...it’s so dark—be careful.” Lupe was born to Celia and Leopoldo Ortiz in Santa Fe, NM on April 27, 1920. One of seven children, she was devoted to her family and loved telling stories about her father, mother, siblings, and relatives. After her mother passed away, she began working and taking care of her family at the young age of 13. Lupe loved to dance! She first danced with her late husband, Alejandro Martinez of Holman, New Mexico, after he “borrowed” a horse and rode across town to attend a barn dance where he knew he could find her. They married one month later on September 3, 1940, in New Mexico and eventually had 14 children; sadly, they lost two of them when there were young: one boy passed away from illness as an infant, and a 5-year-old girl died in a fire. Lupe and Alejandro moved to Nevada and California before they settled in Bingham, Utah, in 1942 where Alejandro worked in the copper mine. They moved to Kearns with their 12 children in 1963, where she continued to live until her passing. Lupe was preceded in death by two young children, parents, two sisters, four brothers, her husband Alejandro (1978), grandson Frankie Apodaca (1989), son Alex Martinez (2002), and daughter Jolene Martinez (2010). Lupe is survived by her 10 children, George (Joanne) Martinez, Maxine Halvorsen, Dolores Martinez, Mary Apodaca, Sally Ortez, Lucinda (David) Cordova, Tressa “Teddy” (Ron) McGuire, Pauline (Rick) Vetter, Fred (Carla) Martinez, Mike Martinez, 23 grandchildren, 37 great-grandchildren, and 4 great- great grandchildren. Her family gives special thanks and appreciation to the Inspiration Hospice Group for their tender care of our mother and grandmother. Services will be held at St Francis Xavier Monday, February 11th at10:30 a.m. 4501 W. 5215 S. Kearns UT 84118. Interment to follow at Valley View Memorial Park in West Valley City, UT.

Lupe passed away peacefully at home February 1, 2013, surrounded by her family. Lupe loved birds, going out to eat, telling jokes and making people laugh. She could entertain for hours with funny stories about her childhood, such as accidentally... View Obituary & Service Information

The family of Lupe Petra Martinez created this Life Tributes page to make it easy to share your memories.