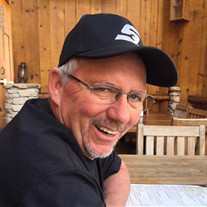 Roger ascended the stairway to heaven on July 10, 2019, at the Huntsman Cancer Center. Behind his sometimes stubborn and direct personality, he was a kind, loving man who would do absolutely anything to help his family and friends. If you had a problem, you could call Roger and feel confident knowing it would be solved. If you needed a vehicle repaired, you could call Roger and feel confident it would be fixed. If you need a lawnmower, snow blower, or weed wacker repaired, you called someone else. He hated working on them and would openly admit that he couldn't fix them. Roger was born in Ogden, UT on March 27, 1963, to Loretta Gale and Richard Walker. On April 28, 1984, he married the love of his life, Teri Harju. He also loved cars. He loved driving them, fixing them, selling them, and he turned this passion into a very successful career. His favorite was the Corvette. At one point in time, if you saw a Corvette in the Western United States, there was a good chance he had bought and sold it. While he wasn't at his shop selling cars, you could find him on the golf course or taking spontaneous vacations with his wife and family, while still selling cars. Roger is survived by his dog (Scooter), his wife (Teri), five children and two sons-in-law (Nick, Amy, Melissa, Vic, Wesley, Kimberly, David), three grandsons (Koda, London, Colton "CJ"), his sister (Wendy), and his Little Uncle Max. He is also survived by his mother-in-law (Ivy Harju) and his brother-and-sister-in-law (Kenny and Jill Harju). The family would like to extend a sincere thanks to Dr. Conan Kinsey at the Huntsman Cancer Institute in Salt Lake for giving us an extra two years with Roger. And a special thanks to Roger's "girls" at the Huntsman Cancer Clinic in Farmington, UT. A viewing will be held on Tuesday, July 16, 2019, at Premier Funeral Services, 5335 So. 1950 W. in Roy, UT from 6-8 p.m. On Wednesday, July 17, 2019, there will be an additional viewing for family and close friends at 1 p.m. Graveside Services will then be held at 2 p.m. at the West Haven Cemetery. If you plan on attending, please dress casually as that is what Roger wanted. The one thing Roger believed more than anything in life was that "you can't fix stupid".

Roger ascended the stairway to heaven on July 10, 2019, at the Huntsman Cancer Center. Behind his sometimes stubborn and direct personality, he was a kind, loving man who would do absolutely anything to help his family and friends. If you had... View Obituary & Service Information

The family of Lyman Roger Walker created this Life Tributes page to make it easy to share your memories.