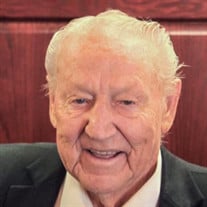 Lynn Donald Kitchen passed away peacefully at home, surrounded by loving family, on September 6, 2020, in Bountiful, Utah. Lynn always had a twinkle in his eye and a ready smile for all of his grandchildren and great-grandchildren. In his own words, “You cannot get a better bunch of grandkids (and great-grandkids) than I have.” He was loved and revered by his family members. Born in Orem, Utah, on September 27, 1932, he was the youngest of 11 children born to Samuel Winfred Kitchen and Edith Prestwich. He graduated from Lincoln High in Orem, Utah and attended Brigham Young University for one year. On April 30, 1953, Lynn married his sweetheart, Beth Kerby, in the Salt Lake Temple. He served in the United States Air Force as a flight mechanic for four years during the Korean War. While in the Air Force in Wichita Falls, Texas, Lynn was top 3 of 250 in his class. The top 5 students were given their choice of ‘open’ Air Force Bases to live at. Lynn and Beth chose Hill Air Force Base located in Utah. They had seven children, and raised them in The Church of Jesus Christ of Latter-day Saints, with most of them serving full-time missions. Lynn's main vocation was a computer engineer for 23 years. He worked for companies such as Burroughs, RCA, and Sperry Univac. Meanwhile, he had a real entrepreneurial spirit and started several successful businesses, such as Western Specialties, Lasatron, and Metal Craft Trailers, to name only a few. Lynn had a hobby of fixing up old cars and reselling them. His children remember taking evening drives in the different cars he had. Convertibles were a favorite of theirs. Lynn and Beth also had BYU season football tickets and would take their children and grandchildren to the games on the weekends. Lynn was always very interested and involved in real estate. Some of his properties provided great retreats for family get-togethers. All of his grandchildren have fond memories of spending time with their grandparents at the Heber cabins or their winter home in Logandale, Nevada. Lynn and Beth often held family parties or reunions to encourage their posterity to stay close. Lynn enjoyed people. He and Beth developed many lasting friendships. They loved card games, soda runs, and later, even traveling worldwide with their friends. Lynn and Beth served a mission in Brisbane, Australia in 1993 for The Church of Jesus Christ of Latter-day Saints. They were a favorite couple among the elders and sisters. In his later years, Lynn kept the road hot, driving between his homes in Bountiful, and Logandale, and out to his ranch in Alamo, Nevada. He loved his ranch and the countless projects they did, including woodworking, constructing buildings, and even stints in the restaurant business. At 87 years old, he may have slowed down a little, but not much. He was out working at his ranch less than three weeks before he passed away from multiple types of cancer. Lynn is survived by his wife of 67 years, Beth; son, Daniel (Rebecca); daughter, Jeanette Elizabeth; son, Gary (Kathy); daughter, Nancy Barker; son, Matthew (Suzanne); son, Mark (Leslee); 20 grandchildren, and 26 great-grandchildren; and brother Wesley. He was preceded in death by his son, Kerby; parents, and 9 siblings. The funeral will be Tuesday, September 15 at 11:00 AM at The Church of Jesus Christ of Latter-day Saints, located at 2110 North Main Street, Centerville, Utah. The viewing will be held Monday at 6:00 to 7:30 PM, and prior to the funeral from 9:30 to 10:30 AM at the same location. Due to the COVID Virus, attendance will be limited but here is a Zoom link: https://us04web.zoom.us/j/71699149768 Interment will be at East Lawn Memorial Cemetery located at 4800 North 650 East Provo, Utah, following the funeral.

Lynn Donald Kitchen passed away peacefully at home, surrounded by loving family, on September 6, 2020, in Bountiful, Utah. Lynn always had a twinkle in his eye and a ready smile for all of his grandchildren and great-grandchildren. In his own... View Obituary & Service Information

The family of Lynn Donald Kitchen created this Life Tributes page to make it easy to share your memories.