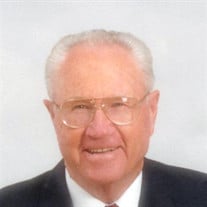 Melvin Dover Hunt 1916 - 2016 Melvin Dover Hunt passed away at his home in Orem, Utah, on June 13, 2016. He was 100 years old. In April, he was humbled by and felt deep gratitude to a multitude of family members and devoted friends who brought him joy and happiness at the celebration of his 100th birthday. Dover was born into humble circumstances on April 18, 1916, in Enterprise, Utah, to Jefferson George and Louisea Caroline Jones Hunt, the seventh of ten children. Dover married Alice Young on November 20, 1940, in the Salt Lake Temple. She preceded him in death on September 26, 2012, after nearly 72 years of marriage. He adored Alice and served her lovingly throughout her life. He now rejoices in their eternal reunion. Dover devoted his special talents of vision, tenacity, resolve, and hard work to his family, his Church, and his community. He had a deep and devoted love for all three evidenced by his endless service to each, always putting their needs and interests above his own. His list of notable achievements and accomplishments in this life is long and numerous, and each could be mentioned, but that would not meet his wishes. Life to him was not to draw attention to himself, but to lift and build others. He is survived by his three sons and two daughters, James (Karen), Judy Gordon (Mike), Craig (Jil), Carolyn James (Randy), Lorin (Merilee) along with 24 grandchildren and 48 great grandchildren. Funeral services are scheduled for Monday, June 20 at 11:00 a.m. at the Orem Cascade Stake Center located at 481 East Center Street, Orem, Utah, with a viewing at the same location on Sunday, June 19 from 6:00 – 8:00 p.m., and one hour prior to the funeral services. It is an honor to remember and pay tribute to this wonderful man who has blessed the lives of literally thousands of people during his earthly life. He will be deeply missed.

Melvin Dover Hunt 1916 - 2016 Melvin Dover Hunt passed away at his home in Orem, Utah, on June 13, 2016. He was 100 years old. In April, he was humbled by and felt deep gratitude to a multitude of family members and devoted friends who brought... View Obituary & Service Information

The family of M. Dover Hunt created this Life Tributes page to make it easy to share your memories.