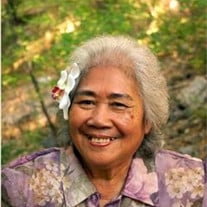 Ma’aola Lam Sam Tenney of Provo, 74, died Friday January 24, 2014. She was born to the late Saili Lam Sam and Faleluaoali’i Faumuina , Aug. 19, 1939 at Alamagoto, Apia, Samoa. She grew up in a happy and loving home with her siblings: Elise, Elise, Samu, Susana, Faasootauloa Tuaopepe Sam Saili, Tuaopepe Tuigamala Matuavao Anetipa, Faumuina Levaopolo Anna Lome, Faumuina Talilino Roebeck and Litia Taale. Ma’aola attended The Church College of Western Samoa and then moved to California where she graduated from Sacramento High School and then moved to Provo and attended Brigham Young University. She was married to William Fa’asefulu Tenney on Dec 23, 1960, in the LDS Mesa Arizona temple and they lived together in Provo before relocating to Pesega, Western Samoa in 1966. Ma’aola was a high school teacher at the Church College of Western Samoa and then worked as a secretary from 1972 for the LDS church construction and retired as the secretary of the Presiding Bishopric Office in Samoa on December 1997. She has resided in Provo for the last 13 years. Ma’aola was an active member of the Church of Jesus Christ of Latter- Day Saints. She served in various callings as a stake young women’s president, ward primary president, primary teacher, Sunday school teacher and relief society teacher. She served a service mission at the Orem Distribution Center and the Provo Deseret Industry in the Humanitarian department. Most recently, she was a dedicated temple ordinance worker in the Provo Temple. Her children, grandchildren, and great-grandchildren were her life. Ma’aola is survived by six of her seven children: Kathryn Levi, Anna Purcell, Katinia Aspinall, William Faasefulu Jr., Michael Anetipa, and Laura Stowers, and 36 grandchildren and 8 great grandchildren. A viewing will be held 9 a.m. Saturday at the stake center in Orem at 80 S and 280 E with her funeral service at 12 noon. Burial will be held at 2 p.m. at the Provo cemetery.

The family of Ma'aola Lam Sam Tenney created this Life Tributes page to make it easy to share your memories.