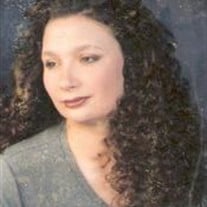 Macy Jo Adams Haddix passed away at home October 21, 2012 at the young age of 35 from medical complications. She was born in Decatur, Illinois, July 16, 1977 to Edward and Donna Adams. She married James Haddix April 10, 2001 and had two handsome sons. Later, after a divorce, she became soul mates with Joseph McPhee and they had a beautiful daughter. Macy graduated from Granger High School and attended Utah State University to obtain a Bachelors Degree in Animal Science. She worked for a while at the veterinarian’s office since she had a love for animals. Later, she worked off and on at the Utah School for the Deaf and the Blind with handicapped children that she grew to love. She also worked at Varian Medical Systems which is where she met her soul mate. After she had her third child, she stayed home to be a full time mother. Macy leaves behind her three children, Eric (9) and Dustin (8) Haddix, and Harmony McPhee (3), two step children, her parents, brother Jonathan Adams, sister Nicole (Brandon) Jones, four nephews, and her soul mate, Joseph McPhee. She is preceded in death by both grandfathers and a grandmother. Funeral services will be held at the Oquirrh Ward building located at 5208 W Cyclamen Way (approximately 6310 South), West Jordan, Utah, on Friday November 2, 2012, at 2:00 PM, with a viewing on Thursday November 1, 2012 from 6:00 PM to 8:00 PM at the same location. A private family viewing will be held 1 hour prior to the funeral service. Burial will be at Elysian Burial Gardens following the funeral service. Condolences may be given online at premierfuneral.com. Donations are requested in lieu of flowers and may be brought to any of the services or mailed to her mother Donna Adams at 3040 West 3875 South, West Valley City, UT 84119.

Macy Jo Adams Haddix passed away at home October 21, 2012 at the young age of 35 from medical complications. She was born in Decatur, Illinois, July 16, 1977 to Edward and Donna Adams. She married James Haddix April 10, 2001 and had two... View Obituary & Service Information

The family of Macy Jo Haddix created this Life Tributes page to make it easy to share your memories.