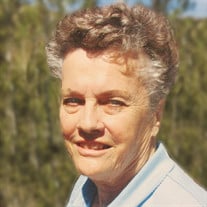 Madge Lyon Fairbanks 1925 - 2018 Madge Lyon Fairbanks passed peacefully Wednesday morning, January 17, 2018, with family holding her hands, comfortable, and loved. Madge lived an incredible life over her 92 years. Born in Washington DC on June 5, 1925, to Hilliard and Madge Lyon Holbrook and raised by mother Loretta Holbrook, she lived her life fully, all over the world. Madge’s father was a Rear Admiral in the Navy, living all over Massachusetts: When she was 13 they moved to St. Thomas in the Virgin Islands, and then back to Massachusetts where she graduated high school at Cathedral High. Madge took Army Nurses Core Training and was certified as a registered nurse in Detroit, where she met the love of her life and husband of 70 years, Dr. Bryce Fairbanks. He asked her to marry him on their first date, and Madge, gave him a slap and said “no.” After her mother kept telling her she should give him another chance, she agreed to go out again. They fell madly in love and were married later that year. Madge and Bryce moved to UT where she converted to the LDS church. She was in love with the West. She had 5 children, Jay, Jeff, Jerry, Jan and James. They had a small travel van and traveled to all the national and state parks in Utah and road tripped to Idaho, Wyoming, Colorado, New Mexico and California. They built a cabin outside of Oakley where they had horses, did hiking, fishing, and hunting, her children growing up with her same love for the mountains. The social director for the family, Madge threw excellent parties, loved to play endless games and go to the rodeo. Madge loved politics. She was a Republican National Committee woman. She worked on senate and presidential campaigns. Madge exposed her children to nightly discussions around the table of politics and world issues, preparing them for life. She is survived by her sons, Jay, Jeff, Jerry & James and 9 grandchildren, and 5 great-grandchildren. She passes on to meet with her daughter Jan and her dearly departed husband, Bryce, who only had to wait for her a short time. Funeral services will be 11:00 am, Saturday, January 27, 2018 at the Holladay 25th Ward, 4650 South Naniloa Dr., Salt Lake City, Utah where a viewing will be held prior to services from 10:00 to 10:45 am. Interment at Wasatch Lawn Memorial Park.

The family of Madge Lyon Holbrook Fairbanks created this Life Tributes page to make it easy to share your memories.