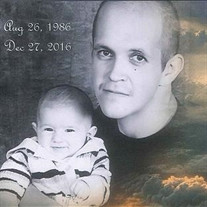 Manuel W. Rodriguez 1986 – 2016 Manuel was born in Salt Lake City, UT on August 26, 1986 to Russell and Cindy Rodriguez. Manuel grew up in the Salt Lake Valley and graduated from Granger High in 2004. On Tuesday morning, December 27th, God added another angel to His kingdom after battling congestive heart failure and diabetes in his physical form. He was taken too young too soon. As many know, you could NOT win an argument or debate with him. He was right. Even if he was wrong he was right. He had a joker personality and huge heart. He would be willing to help if he could in any situation. Our son, brother, father, uncle, friend will be missed very much. He is preceded in death by his father Russell Rodriguez. He is survived by his daughter, Alexandria Rodriguez, mother, Cindy Rodriguez, grandmother, Francis Arnold, brothers, RJ (Kassie) Rodriguez and Richard (Melissa) Rodriguez; 2 nieces, 3 nephews, and many cousins, uncles, and aunts. We would like to thank all our family and friends for their generosity. We would also like to thank Woodland Park and Bristol Hospice and staff for their care. Services will be held Friday, January 6, 2017, 12:00 noon at the Calvary Baptist Church, 1090 So. State St. with a viewing from 11 – 12 prior to services.

The family of Manuel W Rodriguez created this Life Tributes page to make it easy to share your memories.

Manuel was born in Salt Lake...