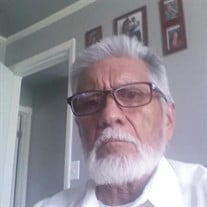 Marcos (Mark) Rojas has gone home to our Heavenly Father on December 12, 2020. He was born on October 22, 1933. His mother Epimenia Carmen Lopez, passed on July 6, 1942. His father Francisco Rojas, passed on Octobert 18, 1962.. Marcos was a father, brother, grandfather, great grandfather, great great grandfather, uncle, and father-in-law. He is survived by 2 brothers Leo, and Eduardo, 2 sisters Lola and Gloria, 4 kids Larry, Denise, Robert, Carmen, Percy, 11 grandchildren, 10 great grandchildren, and 1 great great grandchild. He lived most of his life on the West Side of Salt Lake City, Utah. He graduated from West High school. Marcos started working at a young age on the farms to help his parents. He also worked for Stafford waste paper, Western Garfield Railroad, DRG Railroad, then retired November 1983, after working at Portland Cement for 31 years. June 1st 1955 he was drafted to the Army and reported for duty on June 17th 1955 and went on to serve our country for 2 years, came back home on July 1957. He was part of the Mexican Civico Center for 4 yrs, and joined the Fraternal Order of Eagles for 19 yrs and the Knights of Columbus for 15 yrs. Marcos had his first heart attack on the job in November 1981. He loved going to church and helping with the masses, and helping people when in need. He will be greatly missed but never forgotten. The Family would like to thank First Choice Home Health & Hospice for taking care of him and special thanks to his nurses Dawn Austin and Sarha for caring for him so much.

The family of Marcos (Mark) Rojas created this Life Tributes page to make it easy to share your memories.

Marcos (Mark) Rojas has gone home to our Heavenly Father on December...