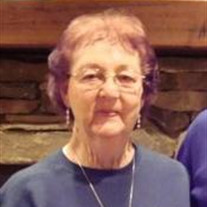 Our loving mother, grandmother and great grandmother, Margaret Anna Carper Olenik, 85, passed away on May 20, 2012, in Orem Utah, following a brief illness, just six days before her 86th birthday. She was born May 26, 1926 to Lloyde and Helen Wort Carper. She met and married her sweetheart and life-long companion, Edward Adam Olenik on January 2, 1946 in Billings, Montana. Ed served in the U.S. Marine Corp and they met just shortly after he received his Honorable Discharge and returned home in 1945. Margaret and Ed raised two active boys and also had busy careers to help support their family. Following high school, Margaret attended and graduated from Cosmetology School in Billings, Montana. She mentioned in her personal history that when she graduated from Hardin High School in 1944, that out of her 100 graduating classmates, there were only 6 boys. All of the other young men had joined the military to serve their country during WWII. Margaret and Ed moved to Willits, California in 1951 where she changed careers and worked as a Secretary for Berglund Tractor & Equipment Co. for 17 years. This is where they raised their family and made many good friends. They moved to Ukiah, California in 1968 and in 1970 she began working at Mendocino State Hospital and later, Sonoma State Hospital, as Personnel Assistant, retiring from the State of California in 1983 after 13 years of service. Following their retirements, Margaret and Ed traveled together, often, to visit their children, grandchildren and their many friends. They resided in Santa Rosa, California following their retirements. Ed passed away in 1991 after 45 years of marriage. She later moved to Chico, California in 2003 to be near to her grand-daughter, Leanna LaFaix . In 2009, Margaret moved to Utah to be near her son, Fred, and his family. Margaret had the most amazing memory. She would tell, in detail, stories from 50 years ago. A lot of them we had never heard before and they would be triggered by something going on, now. You could ask her anything about a specific time or person and she had a memory. She loved her trips to Oregon, and Reno to see her good friend, Dorothy Crawford, and the summer drives to Montana. Grandpa would only drive on ‘country roads’ or when there was slower traffic. Gram always had to drive in the cities or busy roads. Her time in Mexico with her son, Eddie and grand-daughter Leanna, and her cruise through the Panama Canal with her good friend, Julie Metz, were really great memories for her. She loved Puerto Vallarta, Mexico. Gram always enjoyed her visits to be with her grand-daughter Lisa in Texas, Virginia and recently Alabama. She was very strong willed. She wasn’t afraid to say what was on her mind. She had a great sense of humor. She was always up for an adventure. Any time we visited her in California we always took a trip to the coast. She loved Bodega Bay. Her trip to Las Vegas in Nov 2010 (her first time to Las Vegas) was amazing! She loved everything about it. She even played the slots at Bellagio for over an hour on only $20. We visited Hoover Dam for her first time. Summer of 2011 going to the Gilroy Garlic Festival was another highlight. She loved garlic! Locally, she loved going up to Sundance and Park City. After 58 years of residence, she always considered Northern California, her home. She is survived by her son, Fred (Margene) and their eight children, Natasha (Cale) Hunt, Yvonne (James) Drake, Brad, Brent (Jennifer), Dale (Chelsey), Victoria, Blake and Cade, and four great grandchildren, Riley, Elise, Emelia and Summer. Her oldest son, Eddie, preceded her in death in June 2001. She is survived by Eddie's two daughters, Lisa (Jay) Dorman of Montgomery, Alabama and Annie (Cedric) Lafaix of Chico, California. We want to especially thank Carma and Becky of Maple Creek Home Health and Hospice for all of their support, love and assistance these past few weeks. A private family memorial service will be held at a later date. Margaret loved her family very much. She made friends wherever she lived and traveled. She will be deeply missed by all who knew and loved her. We love you gram!

Our loving mother, grandmother and great grandmother, Margaret Anna Carper Olenik, 85, passed away on May 20, 2012, in Orem Utah, following a brief illness, just six days before her 86th birthday. She was born May 26, 1926 to Lloyde and Helen... View Obituary & Service Information

The family of Margaret Anna Olenik created this Life Tributes page to make it easy to share your memories.