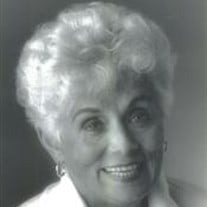 I was born on July 12, 1926 to Mary Elsie Farrer Smith and Orson Smith. I was born in our house in Murray. My first recollections were not of a mother and father, but of a grandmother (we called Dear Dear), a grand-father and two maiden aunts... View Obituary & Service Information

The family of Margaret Gale Smith Snyder created this Life Tributes page to make it easy to share your memories.