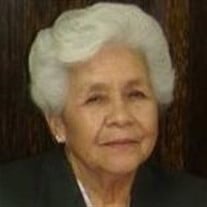 María Elsa Gómez de Mendoza May 15, 1930 - November 20, 2017 Born María Elsa Gómez Camacho, the daughter of Paulina and Alejandro Gómez, she was known by her middle name Elsa. She was raised in Oruro, Bolivia where she graduated from the Canadian Baptist High School. She later attended and graduated from the Nursing School at Clinica Americana in La Paz, Bolivia as a Registered Nurse. Upon graduation she was invited to work at the Medical College in Richmond, Virginia where she worked in the OR for two years and then returned back home to Bolivia where she continued working as a nurse and in many other roles. She married Daniel Mendoza Grandi on July 30, 1960. They were married for 57 years. Together they have three children, Daniel, Lilian, and Julia. They have 7 grand children, Mariel, Daniel Eduardo, Robby, Bryan, Kelsey, Melanie, Danny, and Juliette. She is also the proud great-grandma of Anabelle and Brian. She leaves many more relatives and friends who love her dearly. Elsa was a convert to the Church of Jesus Christ of Latter-day Saints since January 14, 1979. She remained active in her newfound faith for the rest of her life. She had an unwavering faith in the Lord Jesus Christ, she would pray daily for every single family member, from the youngest to the oldest. She liked to serve people, especially her family. She was a perfectionist in keeping everything clean and orderly. She liked to cheer up the sad with her sense of humor. She was a loving and caring mother, daughter, wife, and grandma. Funeral Services will be held Friday, November 24th at 11:00 a.m. in the Lehi 33rd Ward, 650 East 3200 North, Lehi. Burial will be in Lehi Cemetery, located at 1525 N 600 E.

María Elsa Gómez de Mendoza May 15, 1930 - November 20, 2017 Born María Elsa Gómez Camacho, the daughter of Paulina and Alejandro Gómez, she was known by her middle name Elsa. She was raised in Oruro, Bolivia where she graduated from the... View Obituary & Service Information

The family of Maria Elsa Gomez de Mendoza created this Life Tributes page to make it easy to share your memories.