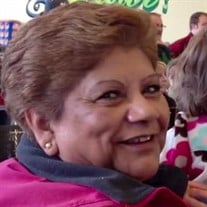 Patty Hess - 12/26/1948 – 10/01/2017 Our dear mother, grandmother, sister, and friend, Maria P. Hess, peacefully passed away surrounded by her loved ones on the afternoon of October 1st, 2017. Patty was born to Juan Ponce Moraga and Narcisa Bustos Balboa in Santiago, Chile on Dec. 26th, 1948. She was the oldest of 5 children. When she was 16 years old, she was baptized into the Mormon Church and later fulfilled a mission to Colombia and her native country of Chile. After she finished her mission, she moved to Utah where she was married and had two beautiful children: Michael (Mick), and Abigail (Chachi). She was later divorced. Patty attended Weber State University where she graduated with two Bachelor Degrees one in Gerontology, and the other one in Criminal Justice. She retired from the Utah Department of Corrections in 1998. Her courage, devotion, and love for her children, made her into a tireless fighter who kept her family going forward. Patty’s children and grandchildren were the most important things in her life! They meant the world to her. Patty was preceded in death by her parents: Juan and Narcisa, and her twin sisters: Anita and Rosita Ponce. She loved her twin sisters dearly, always nurturing and watching over them. Patty is survived by her two children: Michael Hess (Malissa), Abigail Hill (Christian); her five grandchildren: Elias, Hanah, Olivia, Boston, and Amelie; siblings: Gloria Jensen (James), and Juan Ponce (Erika). She is also survived by her dear friend, George Lutz. There will be a viewing from 6:00 to 8:00 pm, Thursday, October 5, 2017 at the Roy 10th Ward, 5900 South 3100 West, Roy, UT. Graveside services will be 12:00 Noon, Friday, October 6, 2017 at the Clinton City Cemetery, 750 West 800 North, Clinton, UT.

The family of Maria "Patty" Hess created this Life Tributes page to make it easy to share your memories.