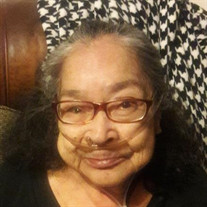 Maria Guadalupe "Lupe" Ornelas, 68, passed away on December 29, 2018 at home with her family. Maria was born to Francisco Del Toro and Maria Guadalupe Perez in Coyote Coahuila, Mexico in her family home. Lupe is the fourth oldest of twelve children, she has six brothers and five sisters. Lupe moved from Mexico to El Paso, TX at a young age to work as a housekeeper and help support her family. While in El Paso she met Carlos Ornelas whom she married on December 5, 1972. They began their life together in El Paso, TX and later moved their family to Chaparral, NM. Together they had four children, three sons and one daughter. Due to health issues Lupe along with her daughter moved to Ogden, UT in 2015 to live with her son and his family. Lupe was a wonderful wife, mother and grandmother and worked hard to take care of her family. Lupe loved to cook and have fun with her family, she was ready to feed you even if you weren't hungry. Lupe is loved by all who met her and will be greatly missed but we will continue to smile as we think about how happy she is being reunited with loved ones whom had departed before her, especially her infant son Carlos Jr. Lupe is survived by her husband Carlos, her kids: Carlos (Kim), Jaime and Gabriela along with her grandson, Jaime, granddaughter, Araya and great-grandson, Jaime. Lupe is also survived by her brothers and sisters: Antonio (Hortencia), Rosario (Jose Luis), Carmen, Catalina (Armando), Fernando, Susana, Dagoberto (Aida) and Estela (Jaime) and her in-laws (Virginia), Martha (Carlos), David (Peggy), and Theresa (James). Lupe was preceded in death by her father: Francisco, mother: Maria, Brothers: Francisco & Martin, sister: Rosa and her infant son Carlos Jr. and in-laws Jesus, Theresa and Jesus Jr. Lupe's family will be holding a Rosary and celebration of life at Premier Funeral in Roy, Utah on Friday, January 18, 2019 from 7-8:30 pm. Please join us as we reminisce about all the love we have for her and all of the great memories we have of her. As time permits her ashes will be taken back to El Paso, TX to their final resting place with her husband and infant son. The Ornelas family would like to thank the Bonneville Dialysis center in Ogden, UT for taking such great care of Lupe for the last four years. We would also like to thank Penny Sorenson, John E. Sorenson and the many other family members that have jumped in to lend an extra hand with Lupe whenever it was needed, we truly love and appreciate all of you.

Maria Guadalupe "Lupe" Ornelas, 68, passed away on December 29, 2018 at home with her family. Maria was born to Francisco Del Toro and Maria Guadalupe Perez in Coyote Coahuila, Mexico in her family home. Lupe is the fourth oldest of twelve children,... View Obituary & Service Information

The family of Maria "Lupe" Ornelas created this Life Tributes page to make it easy to share your memories.