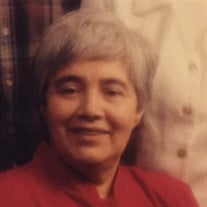 January 12, 1939 – September 3, 2016 “Mothers hold their child’s hand for a moment and their heart for a lifetime” Maria Ninfa Munoz Shuffield passed away peacefully on September 3, 2016 surrounded by her family, at the age of 77. Mom was born to Carlos Munoz Coloma and Ambralina Beroiza Figeroa on January 12, 1939 in Los Lagos, Valdivia Province, Chile. She was the oldest of eight children. She came to the United States in 1969 to work as a nanny and resided in Chicago, Illinois. She worked as a housekeeper and waitress and learned to speak english by watching Sesame Street and Electric Train. Eventually she met her future husband, Robert A. Shuffield. They were married on November 18, 1977 for 21 years and together they had two children. During their marriage, they lived in Greybull, WY., Billings, MT., Lufkin, TX., and eventually settled in Salt Lake City, UT. She worked numerous positions in manufacturing and retired from Zero Manfacturing in 2004. Mom loved flowers and planted them everywhere. She made the best sopapillas and empanadas. She loved listening to the “Three Tenors” and enjoyed dancing. She had a very big heart, was extremely loving and accepting of others. Mom had the most contagious laugh and was loved by many...especially our friends, who were always at our house. Mom is survived by her three children, Jose Lopez (Resides in Chile), Ed (Kim), and Evie. Her 3 grandchildren (Maya, Hannah, and Mason), her five sisters (Angelina, Nina, Doris, Teresa, and Sonia), two brothers (Victor and Lalo) and numerous nieces and nephews. She is preceded in death by her father Carlos Munoz Coloma and mother Ambralina Beroiza Figeroa. We would also like to say Thank You, to the entire staff at Avalon West Healthcare and Bristol Hospice for making Mom comfortable in her final days. Graveside Service to be held on Friday, October 7, 2016 at 1pm Bountiful City Cemetery 2224 South 200 West Bountiful, Utah 84010 Family/Friend Luncheon to follow graveside service at Ward House from 2-4pm. Luncheon address is 261 East Center Street, North Salt Lake, Utah 84054

The family of Maria Ninfa Munoz Shuffield created this Life Tributes page to make it easy to share your memories.