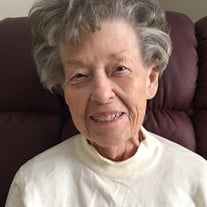 Marian Sylvia Herran Trout 1935 – 2018 Marian Sylvia Trout, at the age of 82 years, passed away on Friday, March 23, 2018 in Provo, Utah and returned to her Heavenly Father. She was born May 12, 1935 to Joaquin Ramon Herran and Effie Leila Harris in San Fernando, California. Marian was raised in the San Fernando area where she attended school and graduated from San Fernando High School in 1953. In 1953 she also met her future husband, Kay, upon his return from the Korean War, where he served in the United States Marine Corps. Kay and Marian were later married on July 2, 1954 in San Fernando, California and established their home in Sylmar, California where they raised their three sons Mike, Rick, and Ken. Marian graduated from Mission City College in 1987 with an Associate Degree in Interior Design. In 1968 Kay and Marian were sealed with their three sons in the Los Angeles Temple. Marian was very active in the LDS church, serving in several positions in the various auxiliaries of the church. Marian and Kay lived in Sylmar for 33 years before moving to Murrieta, California in 1988. Marian continued her church service up to the time she and Kay moved to Provo, Utah in October 2017. Marian loved her family, and loved the joy that they gave her. She loved spoiling her grandkids and great grandkids. Marian is survived by Kay, her husband of nearly 64 years; her brother Jim Herran and his wife Cheryl; sister-in-law Joan Trout; three sons and their wives, Mike (Bonnie), Rick (Linda), Ken (Cyndi); 10 grandchildren; 14 great grandchildren; and several cousins, nieces, nephews, and friends. Marian was preceded in death by her parents and her brother-in-law Sam Trout. Funeral services will be 11:00 am, Wednesday, March 28, 2018 at the Utah Edgemont Stake Center, 303 West 3700 North, Provo, Utah with a viewing prior to services from 9:45 to 10:45 am. Interment at the Evergreen Cemetery in Springville, Utah.

The family of Marian Sylvia Herran Trout created this Life Tributes page to make it easy to share your memories.