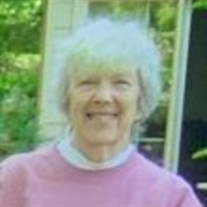 Dr. Marionle Virginia Freeman Narrod passed away June 12, 2020 at age 95. She was born October 5 1924 in Orlando Florida to Beatrice May Johnson Freeman and Marion Lee Freeman. She was woman with an interest in science, gardening, and protecting the environment. She had a strong personality and a sense for justice, equality, and volunteered at numerous organizations. During the McCarthy hearings she was thrown out of congress as she could not stop laughing at how ridiculous they were. She was a friend to people from many nations and cultures, and was known to all by her smile. She is proceeded in death by her husband Dr. Stuart Allan Narrod, who died Dec 24, 2018. They were married 61 years. She graduated from Conrad High School in Delaware in the early 40’s and was the class valedictorian. Upon graduation she moved to Washington, DC to work as a secretary in the War Department and was based in a Quonset hut along the reflecting pool. She put herself through college while working at the FDA testing drugs and cosmetics. She attended George Washington University and received her master’s degree is 1949 and her PhD in Pharmacology in 1953. At that time, she was one of four women in her medical school classes. Throughout her career her research focused on metabolic studies and understanding absorption rates of drugs and fecal and plasma excretion rates. Through her research life she focused on the drug methotrexate and how it impacted cancer and later rheumatoid arthritis. She did her post-doctorate work at National Institute of Heath at the Cancer Institute. This is where she met her husband Stuart. Upon marriage in 1958 they moved to Boston and she continued her research at the Jimmy Fund / Dana Farber Cancer Institute. Later they moved to Oxford for Stuart’s post-doctorate work and she continued her research at Christ Church University. In 1963 she and Stuart moved to Wayne, Pennsylvania to a home they built that backed up to what is now the McKaig Nature Center and raised their daughters. The family attended Main Line Unitarian Church since 1963, where she taught Sunday school and was a member of the Memorial Garden Committee. While in Pennsylvania she continued her research working at Woman’s Medical College, Fox Chase Cancer Institute, Albert Einstein Medical Center and was an affiliate at University of Pennsylvania Department of Pharmacology. She was active in Wayne Woods Garden club, the Equestrian club, and led her kids local 4-H club. Throughout her life she was an avid traveler exploring England, France, Germany, Belgium, Russia, Israel, Mexico and many of the states and National parks throughout the U.S. She enjoyed knitting, sewing, searching for fossils along the Chesapeake Bay and Delaware Canal, hiking the Horseshoe and Appalachian trails, bird watching at Hawk Mountain, and visiting family throughout Pennsylvania, in Delaware, Maryland, South Carolina, and California. In the early 1980’s Stuart joined a Medical Practice in Milford Delaware where she continued her research alongside her husband experimenting with methotrexate to reduce rheumatoid arthritis. She was an active member of the Milford garden club and their president for several years. As president she championed the use of composted poultry manure in gardens in the eastern shore so as to reduce nitrogen loads in the Chesapeake Bay. She rallied local poultry farmers to support this effort and ran it for many years until she moved back to Pennsylvania. She raised funds to install solar energy for the Milford Nature Center. She was also for several years President of Delaware State National club. She and Stuart participated in the Milford Square Dancing group. When Stuart retired they return full time to the family home in Pennsylvania. While retired she volunteered at Longwood Gardens, reconnected with the Wayne Woods Garden club for which she served as president for several years, a member and president for several years of the Main Line Chrysanthemum society, and was a reading tutor to kids at risk at Roberts Elementary School. She survived by her daughters Nancy Pantziris (Tony) and Clare Narrod (Scott Malcolm), grandchildren Peter and Ian Pantziris and Tycho and Fiona Narrod-Malcolm, nephew Daniel Reider, and nieces Laura Reider and Sharon Bundura. In lieu of flowers, donations can be made to the Narrod Family & Friends Charitable Gift Fund, which has been established at the McKaig Nature Center located behind the family home. The goal of the fund is to honor the legacy of Marionle & Stuart Narrod and to expand a sense of action through nature education and exploration in McKaig Nature Center. https://www.enjoymckaig.org/content.aspx?page_id=301&club_id=383980 A celebration of her life will be planned for later in the year when COVID-19 is less of a concern. Meanwhile here is the link to Stuart’s Celebration of life where family and friends shared fun stories of both of them https://www.youtube.com/watch?v=KONCJwMVi1g

Dr. Marionle Virginia Freeman Narrod passed away June 12, 2020 at age 95. She was born October 5 1924 in Orlando Florida to Beatrice May Johnson Freeman and Marion Lee Freeman. She was woman with an interest in science, gardening, and protecting... View Obituary & Service Information

The family of Marianle Virginia Freeman Narrod created this Life Tributes page to make it easy to share your memories.