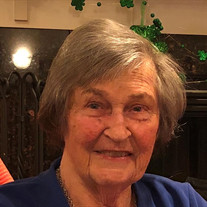 Marianne Luise Brixner Life Dancer Marianne Luise Brixner, of Salt Lake City, Utah, died January 23, 2020, at Capitol Hill Senior Living. Born in Karlsruhe, Germany, on August 22, 1927, Marianne obtained a high school diploma and a Bachelor degree in chemistry from the University of Karlsruhe. She married Lothar Brixner in 1955, and soon after, they both immigrated to the United States. Her work included being a legal translator for the DuPont Company in Wilmington, DE, and a sales representative for Avon Products, Inc. Marianne and Lothar traveled the world and she lived most of her life in southeastern Pennsylvania. In October 2018 she moved to Salt Lake City to be near her daughter and family. Marianne’s life was touched by music and dance. She was a violinist from a young age and participated in numerous orchestras and musical groups. She participated in competitive ice-dancing and later transitioned to ballroom dancing, which she enjoyed into her 80s. She was also an active swimmer and competed in the senior Olympics. Marianne will be laid to rest next to her husband (deceased May 23, 2006) on what would have been their 65th wedding anniversary. Marianne is survived by a daughter, Dr. Diana Brixner, son-in-law Dr. Joseph Biskupiak (Professors at the University of Utah), grandchildren Zack and Anya Biskupiak (students at the University of Utah), sister Susi Honold and sister-in-law Gisela Kloss, both of Karlsruhe Germany. Services will be at the Chester Bethel cemetery on May 16th at 11am 2619 Foulk Road Wilmington DE 19820 Contributions: In lieu of flowers, donations may be made to Atlas Home Care and Hospice, 880 West Heritage Park Blvd #200, Layton, UT 84041 http://www.atlashomecareandhospice.com/

The family of Marianne Luise Brixner created this Life Tributes page to make it easy to share your memories.