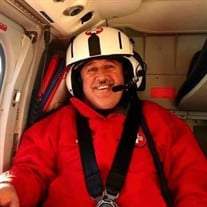 Mariano Rufino Rodriguez, 65, of Provo, Utah, passed away from COVID-19 complications on January 23rd, 2021. He was born on June 22, 1955, in San Marcos, Guatemala. At age 13, he moved in with relatives to attend Adolfo V. Hall Military Institute. He then continued his studies at age 19 at San Carlos University Medical School and graduated in 1980 as a medical doctor. Two years later, in 1982, he immigrated to Utah. Since his medical credentials were not recognized in America, he returned to school to become a Respiratory Therapist. He joined the neonatal ICU in 1984 at Utah Valley Hospital in Provo, Utah, in its beginning years and became an essential member of the team for 37 years. In addition to his work in the NICU, Rufino flew with the Life Flight team transporting critically ill and premature infants for 35 years. He also travelled on missions to Latin American countries, where he provided medical training to doctors to improve care for mothers and children in underserved areas and helped distribute medical supplies to hospitals with few resources. He dedicated his life to the care of infants around the world. Rufino married Dana Shalane Abney on January 18th, 1990, and together they welcomed a son, Rufino Stephan Rodriguez, later that year. Although they divorced in 1998, they stayed in close contact to raise their son. His hobbies throughout the years included a lot of soccer, family, and food! Rufino was always ready to have a picnic in Provo Canyon and walk across the river in his crocs with many children all around him. He loved attending RSL games with family, taking his jeep on dangerous terrain in Moab, and taking pictures of all of his adventures. Lastly, he started a tradition of making and giving quilts for major life events to many family members. Rufino leaves behind a legacy as bright as him. He will be missed for his infectious smile and laughter, passion for saving premature infants, and ability to make everyone feel appreciated, important, and loved. He is survived by his son, Rufino Stephan (Catelyn) and 6 siblings: Rosa Romelia, Maria Mercedes, Victor Alfonso (Lucrecia), Amelia Concepción (Luis), Billy Axel, and Carlos David (Mirna). He was greeted in heaven by his father and mother, Felicito Rufino and Violeta, and brother, Fredy Eduardo Lopez. Condolences can be sent to the family at www.premierfuneral.com.

Mariano Rufino Rodriguez, 65, of Provo, Utah, passed away from COVID-19 complications on January 23rd, 2021. He was born on June 22, 1955, in San Marcos, Guatemala. At age 13, he moved in with relatives to attend Adolfo V. Hall Military Institute.... View Obituary & Service Information

The family of Mariano Rufino Rodriguez created this Life Tributes page to make it easy to share your memories.

Mariano Rufino Rodriguez, 65, of Provo, Utah, passed away from...