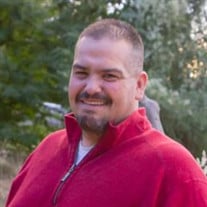 Mariano Santos III, 45, unexpectedly passed away on Wednesday, July 15, 2020 of a heart attack. Mario was loving, tender man whose big heart and generous nature were unrivaled. The only son of Mariano Santos II and Dorothy Marie Santos, Mario was born on September 27, 1974 in Salt Lake City, Utah. He has six half-siblings. Mario attended Taylorsville High School and the Salt Lake Community College Law Enforcement Academy, where he was in the top of his class. Prior to his passing, Mario worked as a Ready-Mix driver for Staker Parson Materials & Construction. He was successful and highly sought-after in his work. In his spare time, Mario enjoyed hunting and fishing, and was passionate about guns and the New York Yankees, who he was able to see play live in 2019. Mario married the love of his life, Wendy Lynn Santos, on March 21, 1995, in Provo, Utah. They were later sealed for time and all eternity, in the Timpanogos Church of Jesus Christ of Latter-day Saints Temple. After years of prayerfully hoping and trying for children, they were blessed with their only son Dominic Mariano Santos who was born on September 13, 2004. Affectionately called “Panaluch,” Dominic was the pride and joy of Mario’s life. Above all else, Mario was devoted to his family. Nothing brought him greater happiness than hanging out with his wife and son who he considered to be his best friends. They were the ultimate “Three Musketeers.” Wendy and Dominic consider their time with Mario to have been the most precious blessing of their lives. Mario was a gregarious, witty, compassionate man who had room enough in his heart for every soul who crossed his path. All those who had the privilege of knowing him will love and miss him until the day that they can be reunited. Mario is preceded in death by his parents Mariano Santos II and Dorothy Marie Santos, and his brother Manuel Martinez. Mario is survived by his wife Wendy Lynn, and his son Dominic Mariano. He is also survived by his sisters Veronica Ambrose, Orlinda Serrato, Mary Boden, Francis Martinez, brother-in-law Ron (Cyndi) Ralston, as well as numerous nieces and nephews. Prior to Mario’s unexpected passing, he suffered from a lengthy, unrelated, illness. In lieu of flowers, donations can be made to the Santos family, to help ease the burden of those medical costs. Donations can be made via Dominic’s Venmo: @D_santos_04. For those who would like to pay their respects to Mario and the Santos family, a viewing will be held from 6:00 – 8:00 pm on Wednesday, July 22 at 546 N 500 W in Orem, Utah. Those attending are respectfully asked to wear masks and adhere to social distancing guidelines. Due to concerns about the COVID-19 pandemic, funeral services will be for family only. The service will be streamed to Mario and Wendy’s Facebook page: https://www.facebook.com/wendy.santos.9655

The family of Mariano Santos III created this Life Tributes page to make it easy to share your memories.