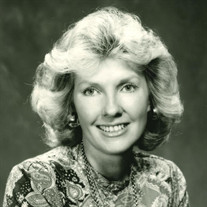 Marilyn Pearl Daniels was born January 6, 1932 in Provo, Utah to James Willis Daniels Senior and Pearl Jolley Daniels. She was the youngest of four children with two older brothers (Jim and Paul) and one older sister (Dona). She passed peacefully into the next life in the early morning of Wednesday, June 24th, 2020 at the Cove Point Retirement Community where she had been only a few days after having been released from a hospital stay where she was diagnosed with terminal Pancreatic cancer. A graveside service will be held at Provo Cemetery in Provo, Utah on July 2nd, 2020 at 11:00 am. She is survived by her two children (Laura and Larry) and numerous nephews, nieces, cousins, grand-nephews and grand-nieces. Marilyn was born at the heart of the “Great Depression” and so learned to be industrious, thrifty and frugal from a young age. She and her friends would often go looking for pennies, dimes and other things that people had lost. Her brother Jim worked the tilt-a-whirl and would sometimes hold the passengers upside down perhaps longer than necessary so Marilyn and her friends could have something to find. After graduating from Provo High School, she briefly attended BYU. Marilyn married her sweetheart Cale Whipple on January 4th, 1954, briefly before she and Cale moved to Austria with the US Military. After moving back to the States, they ended up in California where Cale and Marilyn were able to realize one of her life goals, to have twins. While in California Marilyn was politically active in several campaigns and worked as model for the prestigious Ford Modeling organization. Due to job changes for Cale, the family moved to Utah so Marilyn and her children could be closer to her family. Marilyn continued her love of being industrious, working as manager of the Cameo room for ZCMI and designing a cosmetics line for the Whole Life company. She also took on additional roles as an actress, author and teacher, participating for several years as a key instructor for the LDS Church’s Education Week program where she shared her knowledge of beauty, love and honesty to hundreds of young adults. Marilyn’s strong sense of family eventually had her move in with her mother to take care of her in her final few years; living in the house her father had built in 1923 using plans purchased from the Sears, Roebuck catalog. While there she was active with the Utah Daughters of the Pioneers and began to help people to discover themselves by helping them with their genealogies and family Histories. She continued to live there until her final hospitalization. Marilyn touched the lives of everyone she knew and everyone who knew her. Her warmth, love, wit and mischievous humor will be missed. Until we meet again dear mother – Fare Thee Well.

The family of Marilyn Pearl Daniels created this Life Tributes page to make it easy to share your memories.