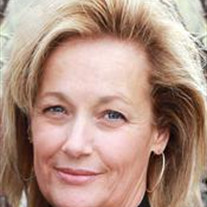 Marilyn Jean Stewart, beloved daughter, sister, aunt, and friend, passed away peacefully at her home in Provo, Utah, on Friday, September 20, 2013. She ended her courageous fourteen year battle with cancer surrounded by her family and loved ones. She was born on November 7, 1964 in San Jose, CA, the fifth child of Devirl Nixon Stewart and Jean Beth Chiverall. She was six when her family moved to Provo. In her childhood years, Marilyn had a very special relationship with her grandparents and great-grandmother, for whom she helped care. She enjoyed many happy years living in American Fork, Utah. She was briefly married to Kay Hunsaker. Marilyn loved cooking, her nieces and nephews, Provo Canyon, fishing, viewing wildlife, and "antiquing." She was first to the rescue whenever anyone needed help. She was famous for her many, many acts of service to others, including her giving of many unique gifts, especially her delicious molasses cookies! She is a member of the Church of Jesus Christ of Latter Day Saints. She is survived by her long-time love, Brent Karren, father Devirl Nixon Stewart, beloved step-mother Mary, siblings Grace Lynn Clayton (Lon), Nick Stewart (Diane), Mary Stevens (Gary Ellefsen) fourteen nieces, nephews and their spouses and children. She was preceded in death by mother Jean Chiverall Stewart, brother David Nathaniel Stewart, grandparents Lynn and Alice Chiverall, Devirl B. and Grace Nixon Stewart, and great-grandmother Ellen Chiverall. Funeral services will be held at the Orem Northridge Stake Center, 1660 N. 200 W., on Thursday, September 26, 2013 at 11:00 am, viewing prior to services from 9:30-10:45 am. Interment will follow at Murray City Cemetery. In lieu of flowers, donations may be made to the Marilyn Stewart Memorial Fund at any U.S. Bank.

Marilyn Jean Stewart, beloved daughter, sister, aunt, and friend, passed away peacefully at her home in Provo, Utah, on Friday, September 20, 2013. She ended her courageous fourteen year battle with cancer surrounded by her family and loved... View Obituary & Service Information

The family of Marilyn Jean Stewart created this Life Tributes page to make it easy to share your memories.