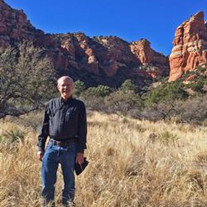 Mark Richmond, 67, of Flagstaff, Arizona, passed away on 26 January 2015 at his daughter’s home. Funeral services will be held at the LDS Olympus 5th Ward Chapel 3070 East Nila Way (4120 South), Holladay, Utah, on Monday 2 February 2015 with viewing for family and friends from 9:30 a.m. until 10:30 a.m. Interment will follow at Larkin Sunset Gardens 1950 East 10160 South in Sandy, Utah. Family and friends are invited to an informal gathering of music, food and conversation following internment, about 3 p.m., at the Sons of Utah Pioneers Building at 3301 East Louise Avenue (2920 South). Mark was born in Salt Lake City to Kimball C. Richmond and Lorraine Gray Richmond on 11 October 1947. He attended Skyline High School and graduating in 1965. He went on to earn Bachelor’s and Master’s Degrees in English Education from the University of Utah in 1971 and 1974. Mark loved words. He taught them. Reflected on their poetic presence and used them as tools within the frame of his songs. William Shakespeare informed us that “Words are easy, like the wind. Faithful friends are hard to find.” Mark Richmond was a friend. People fortunate enough to wander within his sphere of influence knew of his compassion and loved him for his gentle authenticity. Friends of Mark have always been blessed by his music. As a player he moved comfortably between guitar, piano, autoharp, and harmonica. Whether you were listening to his personal performance, sharing from his enormous and incredible music collection or standing in the mountain air of Northern Arizona listening to a band that few people recognized but Mark knew intimately, you were in awe of what he knew about music. He appreciated the beauty of a melody, the poetry of its lyric and the pedigree of the composition. Mark could tell you about any song, its composer and every musician in the studio. He could inform you of music’s enduring depth by telling the influences upon the artist and the influences upon the artist before him. Listening to Mark talk about a band was like sitting at the feet of a great genealogist while they explained the beauty of family and the importance of each generation’s contribution to the present music’s beauty. Mark’s love of music and friends was heartfelt and uncompromising. One friendship that defined his music was a long time collaboration and respect for the sentiment of the music of Utah Phillips and Rosalie Sorrell. Mark knew them well and played guitar with them often. Mark sought adventure. The San Juan River was familiar to him. He loved any new train especially when he had not yet seen its end. He loved the land long before political correctness created bureau driven sustainability. In the 70’s Mark wore a jacket embroidered with “The Monkey Wrench Gang”. He was not just a land lover and protector, he devoured the wild. He loved the trails because he walked them. He knew the rivers through his own immersion in them and counted the stars as one notices patterns in his own ceiling. From the silence of Hovenweep to the majesty of Monument Valley, Mark honored and protected America’s Southwest. Mark was an educator generally teaching literature, language, or critical thinking at secondary school in Utah, Wyoming, and Arizona. His long career working with at risk students stands as a tribute to a life well spent serving others. A comment from his nephew says much. “A visit from Uncle Mark always brought music, conversation, food, and movies.” We who love him will forever miss him because he changed us. We will listen to music with new ears now. We will hope to find a perfect song capable of filling the hole in our heart. We are lessened by his passing. The heavenly choir, on the other hand, is about to make music they never knew before. Mark is preceded in death by his parents Kimball and Lorraine Richmond. Mark is survived by his daughter Melissa Niemi (Lars Niemi), grandsons Jens Niemi, Anders Niemi and friend and former wife Linda Anderson Richmond. Brother, Robert C. Richmond (Dana), sister, Gayla Richmond Noll (Les Noll), sister, Linda Richmond Clapier (Michael Clapier), and brother, Bryan J. Richmond (Marty). In lieu of flowers, Mark’s family suggests that you donate money or time to the local hospice of your choice

The family of Mark Kimball Richmond created this Life Tributes page to make it easy to share your memories.

Mark Richmond, 67, of Flagstaff, Arizona, passed away on 26 January...