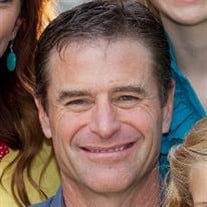 Markus Hans Hegewald 1967 - 2016 Markus Hans Hegewald, aged 48, surrounded by his family, returned home to his Heavenly Parents in his home in Lehi, Utah on Monday, November 14, 2016 after a valiant fight against pancreatic cancer, which was diagnosed in Jan 2016. A special thank you to his doctors, Dr. Cordell Bott, Dr. David Garry, P.A. Scott Bramble and Dr. Scott Smith and all the nurses that cared for him. Thank you to his hospice team, Collette, Levi, Wayne, Joy & Dr. Workman. Markus was born, November 27, 1967 to Hans Martin Hegewald and Selma Gertrude Anita Moench in Salt Lake City, Utah. He grew up in Murray, Utah and graduated from Granite High School. He earned his Bachelor’s Degree in Accounting from the University of Utah in 1997. Markus was briefly married to Kathleen Locke and Laurie Jones before marrying Melanie Ivie on May 18, 1996. They were later sealed in the Salt Lake Temple on May 17, 1997. They have four beautiful children, Hillary Ivie Hegewald, aged 18, Olivia Ivie Hegewald, aged 14, Ashley Ivie Hegewald, aged 10 and Masen Markus Hegewald, aged 7. His children are his greatest and most treasured achievements. He loves them with every fiber of his being and he is their mother hen. His favourite times are when he is with the kids. He would rather spend time with them than anything else. Markus is a member of the Church of Jesus Christ of Latter Day Saints and served in many and various callings throughout our church. He especially loved working with the youth. His relationship to the Saviour became his greatest strength. Markus is a man of all trades, working in various industries in sales and construction. He has a strong work ethic and worked from a very young age, learning the art of masonry and cement from his father. He has left a part of him at many friends and neighbors homes in their concrete. At the time of his death, he was the Customer Service Manager at Arco Packaging in Murray, Utah. Markus is an avid sports enthusiast and is very athletic in any sport of his choosing. He has a special love and talent for soccer and played his whole life. He has passed his athletic abilities on to his children and they love kicking and throwing balls around with him. He enjoys golf, camping, backpacking, snow skiing and snowboarding, and especially, fly fishing with his cousins. Markus is survived by his wife, Melanie and their four children, Hillary, Olivia, Ashley and Masen. His parents, Hans and Judy Hegewald and Anita and George Mueller. His sisters, Heidi Vert and Ramona McIntosh. His parent’s in-law, Lewis and Bonnie Ivie and in-law siblings, Lori & Corky Johnson, Kristen & David Muir, Brian & Suzanne Ivie, Kerrilyn & Keith Southard, Kimberly & Dustin Jensen, Jennifer & Jarod Jones, along with numerous nieces and nephews, aunts, uncles and cousins. He was preceded in death by his grandparents, aunts & uncles, his older brother, Clemens, his brother in-law’s, Craig Phillip Ivie & Chester Vert, his step brother, Matthew Wood, his step sister, Christina Buckner and his sweet cousin, Kevin G. Hegewald. Farewell services will be held at the Lehi East Stake Center 851 North 1200 East, Lehi, Utah on Saturday, November 19, 2016 at 11:00 AM. A viewing will be held at the same location, prior to the service on Friday, Nov. 18 from 6:00-8:00 PM and Saturday, Nov. 19 9:30-10:30 AM. Interment will follow the farewell at the American Fork (south) Cemetery 26 West 600 North, American Fork, Utah. On-line condolences may be left at www.premierfuneral.com. In lieu of flowers, a charitable donation account has been set up at any Wells Fargo branch under Hope for Hegewald or Go Fund Me at www.gofundme.com/jrnexab8

Markus Hans Hegewald 1967 - 2016 Markus Hans Hegewald, aged 48, surrounded by his family, returned home to his Heavenly Parents in his home in Lehi, Utah on Monday, November 14, 2016 after a valiant fight against pancreatic cancer, which was... View Obituary & Service Information

The family of Markus Hans Hegewald created this Life Tributes page to make it easy to share your memories.