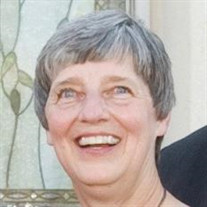 Marlae Rindlisbacher 1949 – 2016 Family and friends mourn the passing of a faithful and remarkable woman, Marlae Rindlisbacher. She passed away at her home on March 12, 2016 following a courageous battle with ovarian cancer. Marlae was born April 2, 1949, to Lowell Eliason Call and Carolyn Johnson Call. Her early years were spent traveling throughout the world as her father served as an air force pilot in the military. She graduated from Orem High School, class of 1967. She worked at Brigham Young University for 43 years, and also earned her BA degree at BYU. In 1972 she started working in the department of Instructional Graphics at the university, ending her career with the BYU Office of Information Technology in September 2015. Marlae married one of her many employees, Michael Rindlisbacher, November 28, 1975 in the Provo, Utah Temple. The joy of her life was finally realized when two wonderful children, Heather and Benjamin joined their family. The next milestone happened last year when she became a grandmother to Andrew, Aubrey and Adrian Rindlisbacher. Marlae was a faithful and active member of the Church of Jesus Christ of Latter-Day Saints and bore a strong testimony of its truthfulness. She served faithfully and lovingly in many callings, most recently as Relief Society President of the Orem Canyon View 2nd Ward. Marlae had a special gift of listening and caring for others. She enjoyed art, music, gardening, creating, organizing and spending time with family, especially her grandchildren. She is survived by her husband Mike, her children, Heather Rindlisbacher and Benjamin (Trisha) Rindlisbacher, her grandchildren and her siblings Carolyn Janene (William) Everitt; Scott J (Victoria) Call; Clair Johnson (Sandy) Call; Lowell Monte Call; Val Johnson (Carrie) Call; Jacqulyn Olsen; and Lori Waters. Funeral services will be 11:00 am, Saturday, March 19, 2016 at the LDS Chapel located at 762 East 1200 North, Orem, UT with a viewing at the church Friday from 6:00 to 8:00 pm and Saturday prior to services from 9:45 to 10:45 am. Interment at the Orem City Cemetery. We appreciate all the love and concern for Marlae and her family. In lieu of flowers may we suggest helping someone in need or in any way pay it forward.

Marlae Rindlisbacher 1949 &#8211; 2016 Family and friends mourn the passing of a faithful and remarkable woman, Marlae Rindlisbacher. She passed away at her home on March 12, 2016 following a courageous battle with ovarian cancer. Marlae... View Obituary & Service Information

The family of Marlae Call Rindlisbacher created this Life Tributes page to make it easy to share your memories.

Family and friends mourn the...