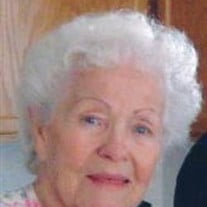 Martha Elizabeth Watson Grow 1924-2-015.Our dear loving mother to great-great grandmother and friend passed away peacefully on 1-18-2015 at her son and daughter in laws home in West Jordan, Utah. Martha was born on 11-13-1924 in Monette, Arkansas to Malcolm Argul Pike and Martha Edna Greer. She had 6 sisters and 7 brothers who all preceded her to god's loving arms. Martha married Harold J. Watson after Harold returned home from World War 2. They had 4 children Michael Dawn Fjeldsted aka “Blondie” (Roger); Kirby D. Watson (Julie); Vickie L. Robinson (Rick); and Linda K. Wright. Mom had 12 grand-children, 18 great grand-children, and 4 great-great grandchildren. Martha and Harold later divorced, and then she married Raymond Grow. She helped raise Ray's 4 children Jim, Kelly, Karen, and Cindy. Ray preceded her to god's kingdom in 1989. Mom was raised in a loving Christian home and had a strong belief in the bible. As a youth she was very active in basketball and track. She lettered all three years in high school. Later in life she loved to golf and watch the Jazz play basketball. Mom spent her youth in Arkansas, then to California, then to Kearns and Magna, then to St. George, Utah and her final 2 years in West Jordan, Utah. She will be missed, loved and prayed for today, tomorrow, and always. Funeral services will be held at 11:00 am on Saturday, 1-24-2015, at the Southside Church of Christ, 3138 West 7000 South, West Jordan, Utah. A viewing will be one hour prior to the services. Burial will be at Valley View Memorial Park, 4335 west 4100 south. West Valley City, Utah. Directly after a gathering of mom's life will be held at her son’s home in West Jordan. All are welcome.

Martha Elizabeth Watson Grow 1924-2-015.Our dear loving mother to great-great grandmother and friend passed away peacefully on 1-18-2015 at her son and daughter in laws home in West Jordan, Utah. Martha was born on 11-13-1924 in Monette,... View Obituary & Service Information

The family of Martha Elizabeth Grow created this Life Tributes page to make it easy to share your memories.