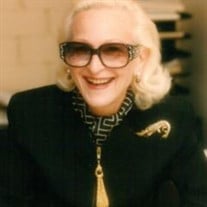 Mary Anne Chalker November 2, 1929 - December 17, 2020 Mary Anne Chalker passed away December 17, 2020 at a memory care facility in South Jordan, UT of complications from the Coronavirus. A dedicated mother, ground breaking businesswoman, political ally to both Democratic and Republican Presidents, avid antique and art collector and home decorator, there was never a quiet moment in her life except her retirement years which were unfortunately marred by severe dementia. Mary Anne was born in San Antonio, Texas to immigrant parents, a Hungarian father and Mexican mother. The family migrated west to Los Angeles, California during the Great Depression to seek new opportunities. In school, she excelled at art, and most academic subjects. Upon graduating from Los Angeles Catholic Girls High School, she worked as a dental hygienist. In August, 1948 she married Robert Ladrigan and soon thereafter had their only child, John Edward. The marriage failed less than a year later and Mary Anne sought new employment as a file clerk with a small, independent insurance brokerage in Los Angeles, the Melbourne L. Leavitt Co. Mary Anne met the true love of her life, Don Chalker, during a business appointment at the office. They attended a lunch meeting and she later asked Don to attend a play in Hollywood. They had a whirlwind courtship and eloped to Mexico after three months, getting married in Tijuana, Mexico on the 4th of July, 1958. The two of them were inseparable in business and at home. Eventually, they earned ownership of the business and became very active in the business and political communities. Mary Anne’s political life started as a Kennedy Girl during the 1960 Democratic Convention, then working on many Democratic campaigns through the 1980’s, eventually serving as a delegate to the 1976 Democratic Convention and as an envoy accompanying President Carter’s wife Rosalyn on several overseas trips. During this time she also shattered ‘the glass ceiling’, becoming the CEO of one of the most successful, independent commercial insurance brokerage firms in California, LFC Insurance Inc. Later, she would switch political parties, serving as a delegate to the 1992 Republican Convention and a campaign adviser to George Bush during his re-election effort. Mary Anne was a child of the depression and had a strong drive to be successful, which allowed her to collect art and antiques, and to own several homes which were always in a state of redecorating. She loved boating, although she could not swim, and enjoyed many days basking in the sun at Catalina Island or Palm Springs. Mary Anne would stay awake late into the night as an avid reader and lover of classic black and white movies. Her professional activities included serving on the State of California Little Hoover Commission; and as a board member for The Bank of Los Angeles and The East Los Angeles Community Union (TELACU). She was very generous with her time, talent and treasure for many charitable causes involving the Hispanic community. She was bi-lingual in English and Spanish which served her well in many endeavors. As a prolific fundraiser for Latino causes, please consider a donation in her name to The TELACU Education Foundation (www.telacu.com) or to the Nativity Prep Academy, San Diego (www.nativityprep.org), to support Latino education. Surviving family include her only child, John Edward Chalker and his spouse Bonnie, and grandson Michael Chalker, his spouse Jesika, and granddaughter Julie Chalker. Mary Anne desired cremation and her ashes will be scattered at sea in the Catalina Channel with those of her husband Don in a private ceremony.

The family of Mary Anne Chalker created this Life Tributes page to make it easy to share your memories.