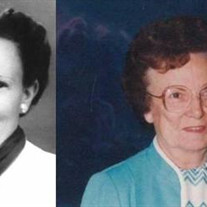 Early on the morning of August 3, 2015, our beloved mother and grandmother was finally able to return to her Heavenly Father, her parents, all her siblings, and her very much missed daughter, Rosemary. Mary was 98 years old, and the last living member of her family. How she longed to be with everyone again. Grandma was born April 9, 1917, to Anton Joseph and Theresia Ehler Wozab, humble Hungarian immigrants, in Salt Lake City, Utah. She was one of nine children who enjoyed a wonderful, fun childhood. Mary especially loved music and sang in many choirs throughout her life. She graduated from Granite High School during the struggles of the depression, and went on to work many different jobs. Her one big claim to fame was winning 4th place in a dance contest at the Coconut Grove. Mary was married to Ronald Myron Geertsen, and they had a son, Richard Myron Geertsen. A few years later, she married Moroni Fox and they had a daughter, Rosemary, and a son, Dana Gregory Fox. When Mary found herself in the position of being a single mother, she went to work as an upholsterer to support her little family. It was a great heartbreak for her to have to leave her children to go to work, but she was valiant in her care of them, and always paid her own way. As years went by, she learned to do computer data entry work, then in its infancy, and became one of the most proficient women in the country at this profession. She joined the American Business Women Assoc., where she was elected president of the Beehive Chapter, and in both 1971 and 1977 was elected Business Woman of the Year for that group. Always a faithful member of the Church of Jesus Christ of Latter-day Saints, Mary served 17 years as the Coordinator of the Junior Sunday School in the Highland Park Ward, as well as many other callings. In 1983, she was called to serve in the California San Diego Mission. She then served for 5 years as a guide on Temple Square followed by 5 years at the Church offices helping to find lost members. However, her crowning achievement and where she worked until she no longer could do the work, was in genealogy---both her own and as a specialist in the Highland Stake. She loved her family and is survived by her sons, Richard Myron Geertsen (Loretta) of Midway, UT, and Dana Gregory Fox, Cottonwood Heights, UT. She is also survived by 10 grandchildren, 27 great-grandchildren, and four great-great grandchildren. Meeting her now in heaven are her daughter, Rosemary, her parents, all of her siblings: Joseph, Josephine, John, Annie, Theresa, Anna, Anton and Frank. The family would like to express their gratitude to all of the people at Sante Care Center, especially Jessie Anderson, who helped her through these last two years. Also, thanks to Jeannie Kennedy for her friendship. Services will be held 3:00 p.m., Saturday, August 8, 2015 at the Highland Park Ward, 2535 So. Douglas St. (1250 E.), Salt Lake City, Utah with a viewing prior to services from 1:30 to 2:45 pm. Interment at the Elysian Burial Gardens, 1075 East 4580 South, Murray, UT.

Early on the morning of August 3, 2015, our beloved mother and grandmother was finally able to return to her Heavenly Father, her parents, all her siblings, and her very much missed daughter, Rosemary. Mary was 98 years old, and the last living... View Obituary & Service Information

The family of Mary Wozab Geertsen Fox created this Life Tributes page to make it easy to share your memories.