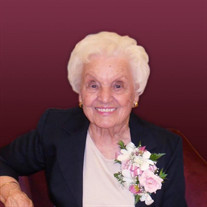 Mary was born in Logan, Utah on September 7, 1920 to Reuel Leavitt and Sarah Alice Beach Rawlins. She passed away on May 15, 2021 after 100 blessed years on this earth. She was living in Lehi, Utah at Abbington Memory Care. Mary graduated from North Cache High School in 1938. She learned to be an amazing seamstress from her mother and to love dancing from her father. Music was always an important part of her life and she made it important in the lives of her children. Mary was “almost 18” when she married the handsome, blond, curly-haired, blue-eyed Clyde Rolla Beecher on July 20, 1938 in the Logan Temple. She worked alongside Clyde in most of his business endeavors, as well as, being a wonderful mom to their four children; Marilyn, Bob, Sue, and Debbie. They mostly raised their family in the Tri-Cities area in Washington State. Then after a few years in Seattle they moved to Salt Lake City when Debbie was in high school. Mary worked for Utah Power and Light in their customer Service Department for many years. Clyde contracted ALS and passed away in 1984. Mary always wanted to have something to look forward to. She budgeted her money, so with family and/or friends, traveled to every continent except Antarctica. She served as an usher at Abravanel Hall and enjoyed the entertainment there. She served a mission for The Church of Jesus Christ of Latter-day Saints at the Bishop’s Storehouse. She was an active member of the Church all of her life. She had many grandchildren live with her for long or short periods of time when they were going to school or working in S.L.C. She loved family parties and gatherings. Annual Christmas Eve parties were held in her home for many years. Gifts were abundant even for those who might drop in unexpectedly. She spent all year making Christmas gifts for the family. Mary was so positive, kind, loving, and gracious. To know Mary was to love her. She attended her 55th high school reunion and reconnected with her former beau, Clayton Lewis. They were married in November of 1993. This happy time was cut short when Clayton passed away 15 months later. Mary was preceded in death by her two spouses, her daughter Debbra, her parents, and three siblings, Reuel B. Rawlins, David Rawlins (Dorothy), and Rhonda (Orin) Maxfield and great granddaughter Marley Nance. She was also preceded in death by Clayton’s brothers and sisters. She was especially close to Alice and Bill Wayman and Arthur and Jann Lewis and their children. She is survived by her sister and brother-in-law, Ruth and Ted Hill, by her children, Marilyn (Tony) Oxborrow, Robert (Katie) Beecher, Ellen Sue (Greg) Dunn, Cal Nance (son-in-law). She has 24 grandchildren and 70 great grandchildren and 3 great-great grandchildren. Clayton’s sons’ Kirk (Linda) Lewis and Craig (Janice) Lewis, who have been so kind and supportive to Mary. They bring an additional 8 grandchildren and 28 great grandchildren. She has a posterity of over 160. A celebration of her life will be held on Saturday, May 22 at the LDS church at 300 North 481 East in Lehi. A viewing will be held at 9:30 a.m. to family prayer time at 10:45. The funeral, handled by Premier Funeral Services, will be at 11:00 a.m. followed by a luncheon for the family north of the church in the pavilion. The burial will be about 2:30 in Farmington, Utah. The address for the cemetery is 500 South 200 East in Farmington. Look for trees toward the east for the burial site. The funeral service will be shared on zoom. Contact Katie for the zoom link. The family thanks all her friends at Abbington, as well as, the Bristol Hospice staff who took such wonderful care of her.

Mary was born in Logan, Utah on September 7, 1920 to Reuel Leavitt and Sarah Alice Beach Rawlins. She passed away on May 15, 2021 after 100 blessed years on this earth. She was living in Lehi, Utah at Abbington Memory Care. Mary graduated from... View Obituary & Service Information

The family of Mary Rawlins Beecher Lewis created this Life Tributes page to make it easy to share your memories.