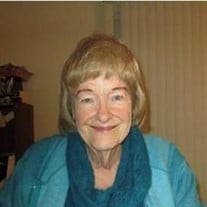 Mary Liebschutz 1936 - 2016 Our dear mother, grandmother, aunt and friend Mary Helen Bragg Liebschutz, with her daughters and oldest granddaughter by her side, returned to her heavenly home on Friday, August 5, 2016. Mom was born in Altadena, CA on November 11, 1936 to Harold Ritter Bragg and Mary Alice McMurray. She grew up in Long Beach CA, and graduated from David Starr Jordan High, then moved to Provo, UT to attend Brigham Young University where she graduated with a bachelor degree in Child and Family Development. While contemplating about serving a mission for The Church of Jesus Christ of Latter-day Saints, she met Lester Stanley Liebschutz; they married in the Los Angeles LDS Temple on December 28, 1959. They decided to return to Provo, UT shortly after the birth of their first daughter Lori; almost five years later they welcomed their second daughter, Cynthia, into the family. Later they divorced, but remained friends. Mom had a great passion for travel, as a consequence she passed that wanderlust on to her children and grandchildren. In the summer of 1977 she bought a trailer, packed up the Suburban then took her two young girls on an adventure to discover the United States along with LDS Church history sites. Mom embraced every opportunity she had to go on scenic drives up Provo Canyon, go camping and on photo safaris, study road maps, make jewelry and color in adult coloring books. Mom would later return to BYU to develop her love of photography. She was recognized in numerous art exhibits for her talents in photography. This love of the arts and nature was also embraced by her posterity who learned from her to notice the wonders that God has created. She served for a few years as the chief photographer for the LDS Utah Valley Single Adult Conference where she was able to produce inspirational slide shows to celebrate each year’s events. Mom was an active member of the LDS Church serving as a visiting teacher and photographer for the ward and stake girls camp committees. Her favorite ways to serve were to do her family genealogy, and attend the temple. She had a strong testimony of her Savior and his gospel, taking every opportunity to share it with her family She is survived by her two daughters Lori Diane Liebschutz and Cynthia Lyn (Troy) Molling and four grandchildren, Holly, Alex, Mariah, and Josh Molling and Bruzer the dog. Funeral services 11:00 am, Tuesday, August 9, 2016 at the Hillcrest 5th Ward, 915 Peach Blossom Dr, Sandy, UT with a viewing prior to services from 9:30 to 10:45 am. Interment in the Mount Olivet Cemetery, 1342 East 500 South, Salt Lake City, Utah. The family would like to thank Hillside Rehabilitation and CNS Hospice Services for their compassionate service during her last couple of weeks of life.

Mary Liebschutz 1936 - 2016 Our dear mother, grandmother, aunt and friend Mary Helen Bragg Liebschutz, with her daughters and oldest granddaughter by her side, returned to her heavenly home on Friday, August 5, 2016. Mom was born in Altadena,... View Obituary & Service Information

The family of Mary Helen Bragg Liebschutz created this Life Tributes page to make it easy to share your memories.