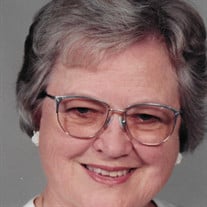 Mary Marie Pape, 92, of Holladay, UT, passed away August 13, 2021, in the care of The Ridge “Cottonwood”. Mary was born September 4, 1928, in Mendon Township, Clayton County, Iowa, to Ralph Blackwell Jr. and Marie (Laufer) Blackwell. She grew up on a farm above the Mississippi River and attended schools in Marquette, Iowa and graduated from Marquette High School. On September 10, 1950, she married Roger Dale Pape in McGregor, Iowa. Mary and Roger made their home in Waverly, IA, where Mary worked for Schield Bantum and Roger worked as an Auto Mechanic. In 1967 they moved to Jackson, Wyoming. Mary was skilled with a typewriter and worked for several companies in Jackson as a secretary, and typed manuscripts of books for authors in the Jackson area. Roger retired in 1995, and they traveled, and camped together in their travel trailer. They lived in Colorado briefly, and back in McGregor, Iowa for several years. They settled in Iona, Idaho, in 2013, to be back out West, and closer to their son Mark. She moved to Holladay, UT in April 2021. Mary enjoyed, cooking, quilting, camping & fishing with family, and her beloved poodle “Brandi”. Mary is survived by her son, Mark (Jill) Pape of Salt Lake City, UT. She was preceded in death by her loving husband of 70-years Roger, her parents Ralph and Marie Blackwell, and her brother Ralph Edward Blackwell Jr. No services are being held at this time. Condolences may be sent to the family online at www.premierfuneral.com.

The family of Mary Marie Pape created this Life Tributes page to make it easy to share your memories.