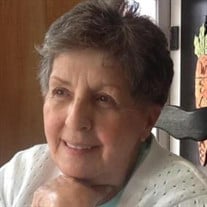 Mary Alice Revoir passed away peacefully, February 24, 2022. She was born September 24, 1940, in Provo, Utah, to Eddavien Ewell Revoir and Joseph Edwin Revoir. Upon the death of her mother in 1941 and her father in 1952, Mary was lovingly raised by Eva and Lawrence Applonie in Riverdale, UT. She was a half-cousin of Lawrence’s. Mary attended Weber County Schools, Weber State College, and the University of Utah. She had been federally employed, retiring from Hill Air Force Base in 1993. Mary would want to be remembered for her dry wit and attitude. She had plenty of both. Mary enjoyed a good book, stimulating ideas, all things French, including her pet Bichons, Simone and Sam. Her personal motto from an Edith Piaf song was “Non, je ne regrette rien!” Mary was a second generation American on her father’s side as her grandparents had immigrated from St. Germain, Turin (Torino), Piedmont, Italy in 1880. On her mother’s side, her twice great grandmother, Mary Lee Bland Ewell Jones, was a second cousin to General Robert E. Lee. She was proud of her heritage, warts and all. Mary appreciated the association she had with the Riverdale Girls (from kindergarten to grave) who were always fun and a great comfort to her in later years. You know who you are, she loved you all. Mary is survived by her son, David Revoir (Mary) Allison, her grandson and all-round super duper guy, Barrett Allison, Ogden, UT; brother Robert E. (Suzanne) Revoir, Fairview, UT; her sister Dorothy Gomm, Syracuse, UT; and sister-in-law, Faye (Bob deceased) Applonie, West Point, UT. Mary was preceded in death by her parents, foster parents, her brothers, Lloyd (Shirlene) Revoir, Larry (Ruth) Revoir, and her other brothers and sisters Evelyn (Lawrence) Day, Don (LaRue) Applonie, LeRoy (Beverly) Applonie, Margaret (Palmar) Turnblom, Bob Applonie, and brother-in-law Kenneth Gomm. Mary requested cremation without funeral services. A graveside ceremony for family and friends will take place at a later date where her parents are buried at the Provo City Cemetery. Condolences can be sent to the family at www.premierfuneral.com

Mary Alice Revoir passed away peacefully, February 24, 2022. She was born September 24, 1940, in Provo, Utah, to Eddavien Ewell Revoir and Joseph Edwin Revoir. Upon the death of her mother in 1941 and her father in 1952, Mary was lovingly raised... View Obituary & Service Information

The family of Mary Alice Revoir created this Life Tributes page to make it easy to share your memories.