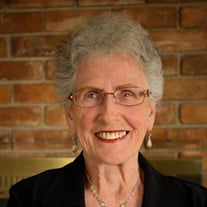 MARY H. THOMAS Funeral Services for Mary H. Thomas will be held on Friday, March 12th at 11:00 a.m. in the Provo 2nd Ward Church Building, 610 West 300 South in Provo. There will be a viewing on Thursday evening from 6:00-8:00 p.m. and another before the services from 10:00-10:45 a.m. For the safety of all, masks are required and physical distancing shall be observed. Our beloved mother, Mary Lois Hatch Thomas, passed away at her home in the early morning hours of Monday, March 8, 2021, the day after her 87th birthday. She was born to Paxman Hatch and Lettie Ossmen Hatch on March 7, 1934. She was the seventh of eight children, five of whom died as infants or toddlers. She was raised in Provo with her two older brothers: Max, 11 years her senior, and Don, 7 years her senior. When she was 3 ½ years old, her father was killed in a boiler explosion at his brother’s business. Six weeks later, her 19-month-old baby brother passed away of an illness. Life was difficult for the remaining family members. Lettie did her best to earn a living. Eventually, she had apartments built on to her house and earned money from rents. Mary attended elementary school at Brigham Young Training School and Timpanogos Elementary. She made friends easily. She also attended Dixon Jr. High and Lincoln High Schools. She spent one fun school year at Woodward High School in St. George during her sophomore year, where she made many friends. Mary met Craig, the love of her life, in August, 1950. He asked her to marry him on Christmas day, 1950. They were married on March 30, 1951. The first home they bought was a small farm in Edgemont, where they had a cow, chickens, ducks and pigs. They had four years of fun on their little farm with their three children, Sheree, Nina and David. Eventually, they moved to a home in Provo, where Russell and Karen were born, and lived there for 8 years. Finally, they moved to Craig’s old family home in Provo after his parents passed away. There was plenty of remodeling and adding on for them to do, and the house was in a constant state of remodel for many years on the pay as you go plan. Mom loved painting, wallpapering, and decorating her home. She sewed curtains for the windows. Two more sons—Rob and Mark--were born while living in this home. She lived there for 57 years, until her dying day. Mary was a member of the Church of Latter-day Saints and loved the gospel. The four oldest children were sealed to them in the Salt Lake LDS Temple on October 30, 1958. Mom began cutting and styling hair from home while her family was still young. This allowed her to earn some fun money. She continued to cut, perm and style hair for about 55 years for friends and family. Mary served as Primary President for five years; was also as a primary teacher and primary chorister. She was very creative in getting the children involved in singing time. Later, she became the ward choir director, and had that calling for at least 25 years in her lifetime. She loved music and loved leading the choir. They presented four special choir programs every year. Mary sewed and crocheted quilts, baby blankets and afghans for her children and grandchildren as well as many items of clothing for the family such as wedding dresses, blessing gowns, and children’s shirts. She also did many other crafts. Mom absolutely loved camping! She and dad enjoyed many camping trips. Our yearly family reunion was a fun weekend of camping together. Our early family vacations include frequent camping with a heavy canvas tent dad had to set up on our trips to Bear Lake and to Yellowstone and many of Utah’s National Parks. Later, Craig and Mary also traveled to Oregon, South Dakota, Colorado, and Canada. After 46 years of marriage, Craig passed away on January 8, 1998, leaving her a widow for the next 23 years. Mom continued to camp, sometimes alone, towing the trailer herself well into her 80s. She had a favorite campsite at Diamond Campground in Spanish Fork Canyon where she could have a view of the mountainside. Mom became a member of Jean’s Golden Girls dance group a year after dad died. She loved dancing with them and made many friends. She traveled with the Golden Girls to Hawaii, Notre Dame, New York, California as well as many Utah colleges where they were part of the half-time entertainment at ballgames. Mary had an adventurous spirit and did enjoy travel. She had the opportunity to go to Aruba, Jamaica, Disneyland, Niagara Falls and cruises to Alaska and the Caribbean. Deeply devoted to her family, Mom attended most programs and concerts of her children, grand-children, and great-grandchildren. She was non-judgmental and had unconditional love for all. She was loved by many people besides her own family including in-laws, nieces and nephews, friends and neighbors. Mary lived a full and happy life--giving of herself and caring about others, while making this world a better place for all who knew her. She will certainly be deeply missed. Mom was preceded in death by her parents, husband, siblings (Don Hatch and Max Hatch) and two grandchildren, Ellen Orchard and Matthew Orchard. She is survived by her seven children: Sheree (Edward) Wilkinson; Nina Orchard; David (Naomi) Thomas; Russell Thomas; Karen (Scott) Cottingham; Robert (Holly) Thomas and Mark (Jana) Thomas. Also survived by 24 grandchildren, 31 great-grandchildren and 5 great-grandchildren.

The family of Mary H Thomas created this Life Tributes page to make it easy to share your memories.


Funeral Services for Mary H. Thomas will be...