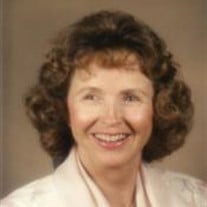 Our beloved wife, mother, grandmother and great-grandmother Mary Bernice Thorpe Robinson Salisbury returned home to Heavenly Father on October 14, 2011. Mary was born November 16, 1927 to William and Canny Squire Thorpe in the bedroom of their Salt Lake City home. A student at Highland Park Elementary and Irving Junior High Schools, Mary was a valedictorian upon graduation from South High School. She received a bachelor’s degree in education from the University of Utah. Mary was a member of the Alpha Chi Omega sorority and Daughters of Utah Pioneers. A life-long member of the Church of Jesus Christ of Latter-day Saints, she faithfully served in many callings in the Church including teacher, ward and stake choirs, stake Relief Society secretary, Temple Square and Church Office Building hostess, and Salt Lake Temple worker. Mary and David K. Robinson were married in the Salt Lake LDS Temple November 3, 1950 and later divorced. A devoted mother to their four daughters, Mary and her girls were great friends and enjoyed many adventures together. She taught her daughters to love the Lord, seek an education, be independent and a friend to all. When in her forties, Mary furthered her education at Salt Lake Community College to become an operating room technician. She enjoyed the challenge and excitement of working in surgery at St. Mark’s Hospital from 1976 until her retirement in 1990. She mentored new technicians and served in the leadership of the Utah chapter of the Association of Surgical Technologists. Mary took leave to spend six months in Israel with BYU Studies Abroad where she worked one day a week in surgery at Hadassah Ein Kerem Hospital. After 12 years of single life, Mary married Frank Boyer Salisbury June 28, 1991 in the Salt Lake LDS Temple and felt so blessed to share her life with him. Following their marriage, she lived in North Logan, Utah until the couple served an office mission for the LDS Church in Columbus, Ohio from 1997-1999. They then moved back to Mary’s home in Salt Lake City. Together they enjoyed many travels throughout the USA and world. Mary was known for her smile, friendliness, laughter, energy, adventurous spirit and love for life. She will be missed but we know she is having a wonderful reunion with family and friends. Mary is survived by her husband and daughters Kaye R. (David) Wessman, Washington, UT; Carol R. (Douglas) Simpson, Lakewood, CO; Helen R. (Richard) Coombs, Henderson, NV; and Linda R. (Thomas) Steger, Burlington, NC; nine grandchildren; and 11 great-grandchildren. She was also much loved by her six stepchildren and their families. Mary was predeceased by her parents; brother Dr. Sherman W. Thorpe; and great-granddaughter Hope Wessman. The family wishes to thank the staff at Highland Cove, Sunrise at Holladay, Utah Hospice Specialists and House Call Doctors. Services will be 2 p.m. on Saturday, October 15, 2011 at the Foothill 6th Ward, 2215 Roosevelt Ave., SLC. Visitation for friends and family will be held at the same location from noon – 1:45 p.m. before services. Interment in Salt Lake City Cemetary. In lieu of flowers, the family suggests donations to LDS Philanthropies (give.ldsp.org/memoriam) or to the charity of your choice.

The family of Mary Bernice Thorpe Robinson Salisbury created this Life Tributes page to make it easy to share your memories.