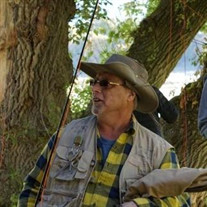 Matthew Lee Baker was born to Wallace and Ivy Baker on January 20, 1964. He loved his parents and siblings deeply. Matthew enjoyed building things with his hands. He had a long career in cabinetry, and made many models, toys, chests, dressers, desks, and pretty much any and everything. He also loved the outdoors. Fishing, camping, and gardening were some of his favorite ways to spend his time. He enjoyed comic books, and eventually became a living encyclopedia to the Marvel Universe and an extensive knowledgebase to the D.C. universe. There was only one thing Matthew loved more than building with his hands, being outdoors, and comic books, and that was being surrounded by the people he loved most. You could always count on him to be there whenever you needed him, no matter who you are. His love, compassion, and devotion were the tell-tale sign of his golden heart and brought strength to those that were close to him. He carried these traits throughout his life, inspiring those around him to be their own best versions of themselves. A heart as loving as Matthews was bound to find love, and he married Debbie Walsh in 1983. They had 3 wonderful children: daughter Cassondra, and 2 sons; Nikolas and Vincent. Matthew shared his passions with his children, and each one of them inherited some of those passions. While they all loved the outdoors, Nikolas became the most passionate about them, while Vincent was taught and given the skill and passion of building things. Cassondra ended up loving Marvel and D.C. characters just as much as her dad did. Later, Matthew and Debbie divorced, but remained friends and co-parents. While Matthew did find love again, he never re-married. Later, Matthew was blessed with Grandchildren. Callin, Annalisa, Arwen, and Remington. As each one came into the world, they stole Grandpas heart and became his world. While he had to suffer the loss of his sweet Annalisa, he was able to share his passions with his surviving grandchildren, and he cherished watching Spider-man with Callin, sleepovers with Arwen, and laughing with Remington about just being silly. Family and friends were everything to Matthew, and he is survived by his 3 children, 3 grandchildren, 6 brothers and sisters, and many friends and extended relatives. His legacy of love and compassion will carry on for generations through his children and grandchildren. A viewing will be held at 601 Mansfield in the church relief society room from 10-10:45 a.m. on Wednesday July 10, 2019 with services to follow at 11:00 a.m. The grave ceremonies will be at Elysian Gardens located at 1075 E 4580 S, Millcreek, UT

Matthew Lee Baker was born to Wallace and Ivy Baker on January 20, 1964. He loved his parents and siblings deeply. Matthew enjoyed building things with his hands. He had a long career in cabinetry, and made many models, toys, chests, dressers,... View Obituary & Service Information

The family of Mathew Lee Baker created this Life Tributes page to make it easy to share your memories.

Matthew Lee Baker was born to Wallace and Ivy Baker on January...