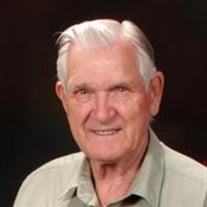 Max Ossmen Hatch was welcomed to his home beyond by loved ones as he peacefully passed from this life to the next on Saturday, April 21, 2012 at the age of 89. Max was born on St. Patrick’s Day, March 17, 1923 in Pocatello, Idaho to Lettie Ossmen and Paxman Hatch as one of eight children. His spirit of adventure led him around the world, flying 214 trips in Army Air Corps C-46 cargo planes in WWII over the Himalayas. His thirst for knowledge directed him to a 30-year career serving thousands of students as a creative, caring school teacher. He married Ginger Rehms from Sioux City, Iowa in 1944 and they were blessed with 8 fantastic, rambunctious children: John (Ann), Mickey (David) Herrin, Wendy (Gregg) Cleverly, Jerry (RaeDean), Judy (Lowell) Herr, Tony (Kim), Sandy (Sherrie), and Ricky (Tiffany). As a faithful member of the LDS church, he served in various callings such as Bishop, Stake High Councilor, Temple worker etc. and he and Ginger served missions in Chile and Mexico. Known as the gadget man, he enjoyed inventing and discovering a myriad of stuff including The Moon Jump, Tumblebug, Toe-Savers, and the world’s first mobile, car-battery-powered VHS video camera in the mid-70s. Max’s plethora of talents included square dance calling, a “fun” drawing test for his kids’ to-be spouses, and his favorite pastime of creating booklets. “MacGyver” Max was known for being able to fix anything with a screwdriver, some wire, and a piece of gum. After 48 adventuresome years with Ginger, who passed away at the young age of 68, Max married Lena Wagstaff and they took off on another LDS mission to Mississippi. Lena passed on after 16 wonderful years of marriage. Max once again found love in the arms of his high school sweetheart, Elda Pope. They were married on 29 May, 2010 and enjoyed a flurry of fun-filled adventures. Counting all three marriages, Max claims 27 children, 98 grandchildren, and depending on the day, 65 great-grand children. People who came to know Max were immediately drawn into his kind and loving nature, and quickly became his fondest fans. All of Max and Ginger’s eight children will be present at his funeral, which will be held at 11am, Friday, April 27th at the LDS chapel on 6300 S 700 W, Murray, Utah. A viewing will be held from 9:45-10:45am before the funeral and from 6-8pm Thursday evening at the same location. Interment will be at Larkin Sunset Gardens in Sandy, UT.

Max Ossmen Hatch was welcomed to his home beyond by loved ones as he peacefully passed from this life to the next on Saturday, April 21, 2012 at the age of 89. Max was born on St. Patrick&#8217;s Day, March 17, 1923 in Pocatello, Idaho to Lettie... View Obituary & Service Information

The family of Max O Hatch created this Life Tributes page to make it easy to share your memories.

Max Ossmen Hatch was welcomed to his home beyond by loved ones...