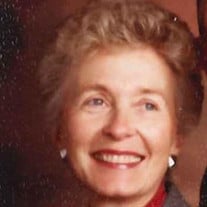 Maxine Swenson, 88, passed away peacefully in her sleep on July 15, 2018 in her home in Murray, Utah. Her funeral services will be held on Saturday, July 21st at 6350 Rodeo Ln., Salt Lake City, UT 84121 at 11AM, following the viewing at 10AM. Maxine was born on September 9, 1929 in Eugene, Oregon. She married the love of her life, Robert Tanner Swenson, on July 2, 1956 in the Logan, Utah temple. Together, Maxine and Robert had four children; Sally, John, Joanne (married to Dennis McCombs) and Carolyn (married to Todd Riggs). Her children have gone on to provide 14 grandchildren and 15 great grandchildren. Maxine graduated with a Bachelor’s degree from the University of Utah in History. Following her schooling, she worked as the executive secretary to Utah’s Governor J. Bracken Lee. Though she loved her schooling, Maxine dedicated most of her time to her family and the LDS church. Maxine held a variety of church callings and served two missions; Columbia, South Carolina and Vancouver, Canada. She regularly spoke of her experiences on her missions and her love for those she served. Maxine’s’ favorite calling in church was as a teacher for early morning seminary in Cut Bank, Montana. For all those who knew her, Maxine was absolutely extraordinary. She was the friend who was always ready to lend a willing hand, a mom who taught her children through her own exceptional example, and a wife who loved purely and eternally. Maxine was always the first to extend herself to those in need. Her unconditional love and service are a small part of the wonderful legacy she left in this lifetime. Maxine will be greatly missed by those who knew her.

The family of Maxine L Swenson created this Life Tributes page to make it easy to share your memories.

Maxine Swenson, 88, passed away peacefully in her sleep on July...