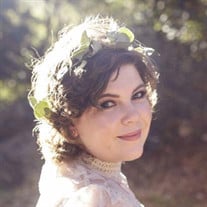 McKenzie Jo Nethercott Balian, passed away Monday, October 29th at the age of 27 from a very rare form of Sarcoma Cancer. Kenzie is survived by her husband Mikayel Balian; her mother and father Sharla and Kevin Nethercott; her sister Brecklyn Kershaw and her husband Ethan Kershaw; her younger brother Grayden Nethercott, currently serving his LDS mission in Barranquilla, Colombia; along with grandparents Monty and Irene Nethercott and Gary and Vanessa Hudman. She was preceded in death by her grandmother Margie Jolley Hudman. Kenzie was born the morning of April 18th, 1991 in Logan Utah. She had the opportunity to live in many places including Tokyo Japan, Sunnyvale CA, Draper UT, Miami FL, Gilbert AZ, and Los Angeles CA. She passed away at her parents home in Layton UT. Kenzie found the love of her life after moving to Los Angeles when she met Mikayel Balian. They started dating shortly before she was diagnosed with Sarcoma. Mikayel stood by her side the entire time and with hope and faith when the cancer had subsided, he asked Kenzie to marry him on October 31st, 2017 with plans to be married in September 2018. When the cancer had returned in late December and more chemotherapy was prescribed they made a decision to move their wedding up to Jan 27th when they were married in Pasadena, CA surrounded by family and friends. Kenzie was well known throughout European Wax Center where she worked as a District Manager. She set an example of hard work, determination, and professionalism through a common sense and loving approach that helped train all the women she worked with to do the same. Kenzie grew up loving to dance and became a very accomplished “tapper”. Her love of Japan and Japanese food developed as a child while living in Japan and continued into adulthood. This love was well known among family and friends as she and Mikayel would sample different ramen shops around LA. What set Kenzie apart from all others was her ability to love and care for others. From a young age, she would come in and out of other’s lives right when they really needed a friend and someone that could love them through a particularly difficult time in their life. This love and friendship were returned to her as everyone from #TeamKenzie rallied to support and love her through her extended battle with cancer. Kenzie will be deeply missed. Though her bright light here on earth may have gone out, she continues to shine brightly in our hearts and in our memories. There is a special Celebration of Kenzie scheduled for Saturday evening, November 3rd, at the Draper Old School Gym; 12441 S 900 E Draper UT 84020. In lieu of flowers, the family has asked for donations to be made to weSPARK, where they received such great support during their recent battle and would like to help other families needing the same. You can make a donation here: http://wespark.org/donate/

McKenzie Jo Nethercott Balian, passed away Monday, October 29th at the age of 27 from a very rare form of Sarcoma Cancer. Kenzie is survived by her husband Mikayel Balian; her mother and father Sharla and Kevin Nethercott; her sister Brecklyn... View Obituary & Service Information

The family of McKenzie Jo Nethercott Balian created this Life Tributes page to make it easy to share your memories.