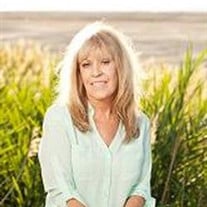 Beloved mother, grandmother, sister and friend, Melodie Treasure, of West Jordan, Utah passed away on October 13, 2015 after a courageous battle with pancreatic cancer. She was 66 years old. She was reunited with her Heavenly Father, daughter Angela, brother Gregory, parents, grandparents, and family. Melodie was born in Lovell, Wyoming on October 8, 1949, and raised by her parents Donna and Monte Treasure. While growing up, she lived in many places such as Iowa, Arizona, Missouri, and Salt Lake City while her father worked for the telephone company and for Albertson’s Food Stores. After settling in Pocatello, Idaho, Melodie attended and graduated from Pocatello High School. She married Raul Avila and lived in various places such as Denver, CO and Carmel, CA while Raul was stationed in the Military. Melodie and Raul settled in West Jordan, Utah, and were blessed with 5 daughters: Angela Christine (deceased), Alicia Dawn, Carmel, Roshelle , and Monique. Melodie divorced in 1978. Melodie worked at Century 21 as a Real Estate Agent, at Karman Kitchens, and at Castletons. Melodie was driven professionally in her favorite career working as an Agent for Mark Travel. During this time she enjoyed traveling with family and friends. Her favorite travel places were Laguna Beach, Cancun, Hawaii, and Jamaica. Melodie found the most joy spending time with her daughters and family. She loved entertaining them with her dancing and laughter. Melodie’s passion for ballet began early while attending Mrs. Pinkerton’s Dance Studio in Pocatello, ID. She was blessed with many talents, and her dancing abilities led her to the ballet and dance program at the University of Utah. Melodie’s love of dance continued throughout her life. She was also an accomplished seamstress and made many ballet costumes and formal dresses for her daughters. Melodie enjoyed working hard, remodeling, tiling, and gardening at her home. Because of her love of the ocean, Melodie embraced tropical décor. Her favorite show was “Charlie’s Angels”, and she adored classical movies such as Gone with the Wind, The Sound of Music, Les Misérables and South Pacific. Melodie was an avid lover of the arts. She frequently attended the ballet, operas, and musicals. Her favorite tradition was going to The Nutcracker every Christmas, especially when her granddaughters performed. Melodie was a devout member of the Church of Jesus Christ of Latter-day Saints and was sealed to her parents and family of seven siblings. Melodie is survived by her daughters: Alicia Dawn Avila Daniels (Dwayne), Carmel Avila Myrick, Roshelle Avila Hindoian (Abraham), and Monique Avila Smith (Cory), eleven grandchildren, three great grandchildren, and six loving brothers and sisters. Melodie’s daughter, Angela Christine Avila, her parents, Donna LaVon Olsen Treasure and Monte J. Treasure, and brother, Gregory Treasure, preceded her in death. The family would like to express their gratitude to all those that assisted on Melodie’s behalf. A Celebration of Life and Viewing will be held on Friday, October 23, 2015 from 6:00 p.m. to 8:00 p.m. at The Woods on Ninth: 6775 South 900 East, Midvale, Utah. Funeral Services for Melodie will be held on Saturday, October 24, 2015, at 11:30 a.m. at the 29th Ward LDS Chapel: 6695 South 2200 West, West Jordan, Utah. Interment will follow services at Larkin Sunset Gardens Cemetery: 1950 East Dimple Dell Road (10600 South).

Beloved mother, grandmother, sister and friend, Melodie Treasure, of West Jordan, Utah passed away on October 13, 2015 after a courageous battle with pancreatic cancer. She was 66 years old. She was reunited with her Heavenly Father, daughter... View Obituary & Service Information

The family of Melodie Treasure created this Life Tributes page to make it easy to share your memories.