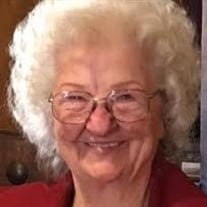 Melva Frances Geare January 10, 1924 – July 27, 2019 Melva Frances Geare, of Hurricane, Utah and Jackson Hole, Wyoming, died peacefully at the home of her daughter, Deborah Empey in Holladay, Utah. She is survived by her daughters, Patricia Jones, Deborah Empey, and her sons, Dennis Geare, Frank Geare and Gary Geare. She is also survived by her eleven grandchildren, Acacia Jones, Neecole Colston, Kyle Geare, Sacha Geare-White, Andrew Geare, Coire Geare, Morgan Empey, Graham Empey, Lauren Wray, Lucia Nakashima, Kai Nakashima, and her great-grandchild Presley Geare. Melva Frances Davidson was born in Rush Springs, Oklahoma to George Orland Davidson and Georgia Hazel Walker Davidson on January 10, 1924. Melva survived her sisters, Marie Townshend and Lorene Welch. Her family was close knit, sharing joys and travails relocating to Phoenix, Arizona during the time of the dust bowl occurrence in the Oklahoma Territories. Melva lived most of her early life in Phoenix. Melva met her future husband, William H. (Bill) Geare where they were both employed by the Southern Pacific Railroad. After a courtship of six months, they were happily married for 60 years until Bill’s death in 2006. Melva Geare was of the post-World War II generation of women who entered the work force. She worked for the Southern Pacific Railroad for 25 years in Phoenix, Tucson, and the San Francisco Bay Area. Then, relocating to Salt Lake City, Utah, she worked for the Union Pacific Railroad for 14 years. Melva was a wonderful mother, grandmother, and great-grandmother. She was a devoted wife and had a remarkable reverence for children. A lover of life, she was an inspiration to family and friends, relished travelling and was still line dancing at the age of 92. All who knew her were fortunate in ways words are bereft to express. She will be remembered and loved in perpetuity. Her immediate family will hold a private celebration of her life at a later date.

The family of Melva Frances Geare created this Life Tributes page to make it easy to share your memories.