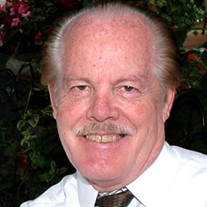 Mel B. Ashton 1940 – 2016 Melvin (Mel) Ballard Ashton, our loving husband, father, grandfather and friend was called home by his Heavenly Father on February 6, 2016, following a valiant battle with ALS, also known as Lou Gehrig’s Disease. Mel was born September 16, 1940 in Malad, Idaho to James Lehi (Lee) Ashton and Mary Gertrude Hardman. Mel had an undying love for his family, especially his best friend and wife of 44 years, TaunyaMazzei, whom he adored and who adores him. Mel’s eyes would light up every time he spoke of Taunya. Mel grew up in Salt Lake City where he attended West High School, and later graduated from the University of Utah with a degree in Sociology/Criminology. Mel had his first paying job at 8 years-old and helped support both himself and his mother after his father died in 1948. Mel worked continuously until just 3 months ago when the ALS forced his retirement. Mel was a dedicated law-enforcement officer who served 9 years on the Salt Lake City Police Force and 20 years as a Federal Agent with the Drug Enforcement Administration (DEA). In 1970 Mel graduated at the top of his class from Quantico following his training with the Bureau of Narcotics and Dangerous Drugs (precursor to the DEA), and was given the opportunity of selecting any prestigious BNDD office in the country, however,Mel chose Denver, Colorado in order to be closer to his sons living in Utah.Mel received many commendations for his law enforcement work, including one for saving the life of a wounded fellow agent. Mel was also commissioned “Territorial Marshal of Oklahoma” by the Governor of Oklahoma for his outstanding DEA work in that state. After retiring from law enforcement Mel was a respected private investigator with his own practice for over 20 years. Mel was also a founding member of the Private Investigators Association of Utah, and served on its board of directors. In his younger days Mel was a successful amateur boxer as well as a 3rd Degree Brown Belt in Kempo Karate. He was also a champion expert marksman with both pistol and rifle while at the Salt Lake Police Department. Also at one point,Mel had a small aircraft pilot’s license. Mel was a devoted member of the Church of Jesus Christ of Latter-day Saints in the Ashley Park Ward in Sandy, Utah, and served tirelessly in many callings, his fondest of which was in the High Priest Group leadership. Mel loved his church and will be lovingly remembered by ward members, friends and neighbors as always having a kind word, a strong testimony and love of the Lord and the Gospel, and as being the first person to offer service to others. Mel is preceded in death by his angel mother, his father, his cherished parents-in-law Earl and Francis Mazzei as well as his son Lance, who succumbed to ALS five years ago. Mel is survived by his sweetheart Taunya, sons Layne (Dorothy), Wayne and Adam (Paula) and daughter Amber. Mel is also survived by his 12 grandchildrenand many other family members and friends whom he loved and who love him. Mel will be greatly missed by all who knew him but will always be remembered as a compassionate person who loved lifeand was always looking for opportunities to serve others. Funeral services will be held at 11:00 a.m. on Friday, February 12, 2016 at the Ashley Park Ward, 10312 East Ashley Park Drive, Sandy, Utah 84092. The family will receive visitors at the church one hour before the funeral. Interment will be at the Redwood Memorial Cemetery, 6500 S. Redwood Road, Taylorsville, Utah. Mel’s family would like to thank his many friends, neighbors and ward members for their outpouring of love and service to Mel and Taunya these past few months as the ALS began to take a heavy toll on his health.

The family of Melvin B. Ashton created this Life Tributes page to make it easy to share your memories.